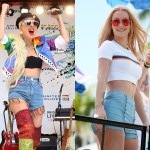 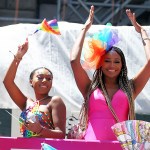 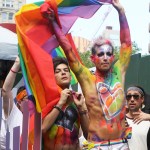 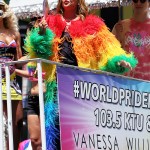 It’s Pride month! Join us in remembering the celebrities who’ve used their voices and platforms to participate in Pride Marches all over the globe, from Lady Gaga to Cynthia Bailey.

While messages and social media posts demanding change are impactful, Hollywood’s elite have taken things a step further in recent years when it comes to fighting for what’s right. In honor of Pride Month, we’re taking a look back at Lady Gaga, Iggy Azalea and more stars who’ve been strong allies to the LGBTQIA+ community. While the pandemic sadly stopped many pride marches from happening (in person) in 2020, we’re looking back at the many other years Hollywood’s A-list stars have taken to the streets (and stages) to call for equal rights for everyone.

See these stars and more by clicking through our attached gallery above! We’ve also put the spotlight on a few famous LGBTQIA+ allies below:

“True love is when you would take a bullet for someone,” Gaga said during her speech. “And you know I would take a bullet for you any day of the week,” Gaga said during her speech. She expressed how crucial change is to “the system of an extremely oppressive administration.” The singer continued, “I may not, to some people, be considered a part of this community, even though I like girls sometimes. I would never degrade the fight you have endured,” she said, noting, “You have the power. You are so, so powerful, and I hope you feel that power today.”

In 2016, Iggy Azalea celebrated Pride Month by joining radio host’s Elvis Duran’s parade float for Miami Beach Gay Pride Parade. The “Kream” rapper also teamed up with the radio personality to host a fundraiser for the LGBTQ community right before the parade that year.

It’s not the only time Iggy has showed her support to the community. She also performed at Chicago’s Pride in the Park in June of 2019, where the rapper delivered a powerful message advocating for the rights of transgender people. “To a lot of people, you guys are still invisible and you have to fight every day just to be who you are. That’s why we’ve gotta be here tonight because we gotta be loud as f—. This shows you exist and you are valid,” Iggy told the crowd at the Pride event, per Billboard.

Attending the World Pride march in 2019 was especially important for Cynthia Bailey, because The Real Housewives of Atlanta star was there with her daughter Noelle Robinson. It was Noelle’s first Pride parade, which was a significant milestone, since the college student had recently come out as sexually fluid to her mother at the time.

“That was a really great thing for us because she got to celebrate world pride, one of the biggest pride’s last year,” Cynthia said as she reflected on the special bonding moment she and Noelle had at the New York City Pride parade in an EXCLUSIVE interview with HollywoodLife a year later. The Bravo star added, “And [Noelle] had just come out too so it was amazing to see her community and just how vast it is. I just use my platform as well to celebrate and support the LGBT community.” Noelle chimed in to gush that the experience was “really fun!”

Frankie Grande was also at the 2019 World Pride NYC parade! Ariana Grande‘s brother, who’s known for competing on Big Brother, is pictured above waving the LGBTQ flag with his boyfriend (app developer Hale Leon) at the march. Exactly one year prior to this parade, Frankie admitted that he was initially “nervous” to come out to his famous sister.

“I remember being so nervous to tell my little sister. I was like, ‘I have something to tell you… I’m gay’, and she was like, ‘Cool, do you have a boyfriend?’ and I was like, ‘Yeah’, she was like, ‘Great, when do I get to meet him?’,” Frankie recalled in the June 2018 issue of Gay Times.

So many other stars have shown their Pride for the LGBTQ community over the years especially the Real Housewives! Many, including Real Housewives of New Jersey‘s Teresa Giudice and singer Vanessa Williams had an absolute blast while doing so! You can see these celebrities and more at Pride events in HollywoodLife’s attached gallery above.