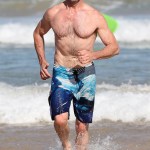 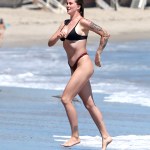 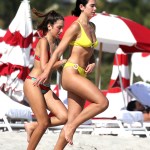 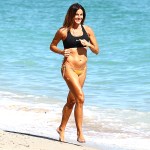 Not only are these stars breaking a sweat on the beach, they’re looking damn good while doing so. Kourtney Kardashian, Hugh Jackman, & more celebs have been known to flaunt their bods while jogging seaside.

Summer is in full swing and so, our favorite celebs are making sure to stay in tip-top shape. But — instead of hitting the gym, some celebs are bringing their workout outside — to the beach! Stars such as Kourtney Kardashian, 40, Hugh Jackman, 50, and Robert Pattinson, 33, have figured out that catching some rays while breaking a sweat just may be the best way to workout. We’re taking a look at all of the stars who have been showing off their amazing bods while hitting the sandy shores for a workout.

When Hugh took a dip in the water at Australia’s Bondi Beach on August 1, he broke out into a jog as he emerged from the ocean and well, it was quite the scene. Hugh looked like the ultimate hunk as he hit the sand running while dripping wet, and the moment was something out of a movie!  He looked incredible in blue board shorts and left his shirt at home, showing off his flat abs and toned pecs.

Kourtney always looks amazing, but she’s become quite the bikini queen as of late. When she went for a jog in an electric yellow bikini in 2018, she turned heads left and right. The stunner was seen jogging down the beach in her barely there swimsuit that August and she had a true Baywatch moment of her own. With her hair flying in the wind, she fearlessly ran right into the ocean before splashing in the water with a group of gal pals. Kourtney definitely had the ultimate hot girl summer!

Meanwhile, Robert Pattinson showed off his incredibly toned bod when he hit the ground running in the sunny Bahamas. During a luxurious week in Antigua, he was spotted spending one day taking a jog by the beach. Clearly, the actor had been putting some major time in at the gym, because he was ripped! You can see all the stars who have been known to go jogging on the beach by clicking through the gallery above!