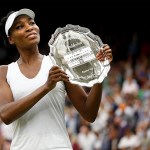 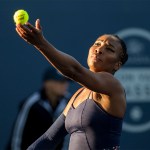 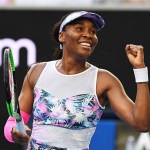 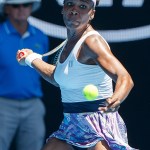 Bio:
Venus Williams (born Venus Ebony Starr Williams on June 17, 1980 in Lynwood, California) is an American professional tennis player. Venus’s father, Richard Williams, introduced her to tennis at a young age, taking her to the public courts of Los Angeles. Venus, along with her sister, Serena Williams, demonstrated a natural talent for the game. By age 10, Venus could serve a ball at 100 miles per hour. At that age, Venus and her family moved to West Palm Beach, Florida, so that she and Serena could attend Rick Macci’s tennis academy. She went 63-0 on the United States Tennis Association junior tour and in October 1994, at the age of 14, Venus went pro. In her first professional match, she beat No. 50-seeded Shaun Stafford. Though Venus struggled in the first years of her professional career, she found early success in 1997, breaking into the Top 100. That year, Venus became the first woman since 1978 to make it to the US Open singles final on her first attempt. She won her first singles title that year, winning the IGA Tennis Classic. Venus continued to find success after that initial victory, winning Wimbledon and the U.S. Open in 2000 and taking home the gold medal in the 2000 Olympic Games for both singles and in doubles (with her sister Serena.) A wrist injury limited Venus’s play in the early 2000’s, but she returned to form by winning Wimbledon in 2007 and 2008, beating her own sister for the title. In 2012, Venus and Serena won the doubles championship at Wimbledon and at the London Olympics. In 2015, Venus claimed her 46 th career singles title at the ASB Classic.

Best Known For:
Venus Williams is best known as a world-class tennis player.

Personal Life:
Venus was diagnoses with Sjogren’s syndrome, an autoimmune disease, in 2011. She is a vegan. Venus dated pro golfer Hank Kuehne until 2010. She is currently involved with Cuban model, Elio Pis. In 2007, Venus launched her own fashion line, EleVen, and in 2009, she and Serena beca,e part owners of the Miami Dolphins football team.

Venus Williams spoke to HL about how her tennis career has helped her success off the court.

It’s a big year for Venus Williams, who is the subject of Oscar nominated film ‘King Richard’ about her family. The tennis legend is set to present with sister Serena.

Will Smith opened up about the life lesson he will bring with him forever after working with the Williams sisters on ‘King Richard.’

The internet didn’t respond kindly to Jane Campion’s ‘jab’ at the Williams sisters during her ‘Best Director’ acceptance speech. Fans accused Jane of being ‘arrogant,’ ‘self-righteous,’ and ‘insecure.’

Venus and Serena’s mother Oracene Price gets her own spotlight in Will Smith’s new movie ‘King Richard’. Here’s everything to know about the superstar athletes’ other tennis coach!

Tennis champions Serena and Venus Williams shared ‘life advice’ with Simone Biles on how to protect their mental health amid the pressures of being an athlete.