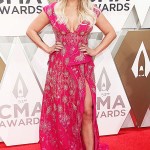 Bio:
Miranda Lambert (born Miranda Leigh Lambert on November 10. 1983 in Longview, Texas) is an American country artist. At 16, Miranda appeared at the Johnnie High Country Music Review, the same talent show that launched the career of LeAnn Rimes. While in high school, Miranda made her professional debut with The Texas Pride Band. In 2003, she competed in the Nashville Star talent competition, where she won third place. That year, she signed with Epic Record and released her debut single in 2004. Her debut album, Kerosene, entered the Billboard Top Country Album charts at number 1. It would go on to be certified platinum. Her second album, Crazy Ex-Girlfriend, would have Miranda’s first Top 10 Country hit, “Gunpowder & Lead.” Her third album would produce two number one hits and continue her success as a country music superstar. Her 2014 album, Platinum, won the Grammy Award for Best Country album. In addition to music, Miranda has dabbled in acting, debuting on a 2012 episode of Law & Order: Special Victims Unit.

Best Known For:
Miranda Lambert is best known as a popular country music artist, with hit songs including “Gun Powder and Lead,” and “White Liar.”

Personal Life:
Miranda is a fan of fashion and television, claiming shows like Project Runway and Oxygen’s Snapped as some of her favorite. Miranda began dating fellow country musician, Blake Shelton, in 2006. The two were engaged in 2010 and were wed in 2011. The two collaborated frequently, producing the ACM-award wining song, “Over You.” In July 2015, after nearly a decade together, Miranda and Blake announced they had divorced. She started dating Anderson East at the end of 2015.

Most of Blake Shelton and Miranda Lambert’s friends ‘have sided with Miranda’ ever since the couple split, an insider told HollywoodLife.com EXCLUSIVELY. They don’t for one second believe the rumors that she cheated on him.
Did Miranda Lambert ever cheat on Blake Shelton? She denies the rumors and her friends stand by her, a source spilled to HollywoodLife.com EXCLUSIVELY. Not only does Miranda think the rumors that she cheated are crazy, but she thinks it was all a “campaign to make Blake look better for up and leaving her” — find out more!

Miranda Lambert is totally shocked her ex-husband Blake Shelton has moved on so quickly with Gwen Stefani. HollywoodLife.com spoke EXCLUSIVELY to a source who revealed that ‘The Voice’ judge went out of his way to convince his ex-wife that he’d never get close to his co-star. Ouch!
Miranda Lambert, 31, and ex-husband Blake Shelton, 39, split just a few months ago and he’s already started dating his fellow “The Voice” judge Gwen Stefani, 46. A recent report claimed that the reality show co-stars were always flirty but a source tells HollywoodLife.com EXCLUSIVELY that in spite of the obvious chemistry the country crooner went out of his way to convince his now ex-wife there was nothing going on between him and the pop star — and there never would be.

AHHH! Miranda Lambert, is that you? Everyone’s favorite queen of country music took to Instagram to share her prep routine for the Country Music Association Awards tonight and it is SCARY. Check out the pics!
Woah, Miranda Lambert, 31, you’re scaring us! Miranda always looks absolutely amazing, and the morning of country’s biggest night, the crooner decided to give us a glimpse into her pre-CMA Awards ritual that gives her that perfect glow. Only problem is, it’s giving us nightmares! You’ve got to see the freaky photo.

Carrie Underwood is one hot mama! The country crooner covers the December issue of ‘Cosmopolitan’ magazine, where she opened up about her marriage — especially in the wake of so much divorce.
Carrie Underwood, 32, looks better than ever on the December 2015 cover of Cosmopolitan magazine, as she opened up about her solid marriage to hockey player Mike Fisher — an interesting topic, especially since she’s so close to Miranda Lambert, who just split from her hubby, fellow country crooner Blake Shelton.

Well, this is interesting! A new report reveals that Blake Shelton and Gwen Stefani were already showing signs of being into each other even before he officially split from Miranda Lambert.
Did Miranda Lambert, 31, actually witness the early stages of Blake Shelton, 39, and Gwen Stefani, 46, getting together? There are some crazy new details being revealed about how The Voice judges — and recent divorcees — came to be Hollywood’s hottest rumored couple!

Say it ain’t so! Taylor Swift and Miranda Lambert’s hot duet in October may have all been just for show — because behind the scenes they’re totally feuding, according to a new report. But what does Miranda’s ex, Blake Shelton have to do with it?
Is Miranda Lambert the newest star shunned from Taylor Swift’s squad?! The ladies have reportedly been in a bitter feud for years, and it only intensified over the summer when the “Little Red Wagon” singer split from Tay’s pal, Blake Shelton. So why were they performing together on Oct. 21?! Here’s the scoop…