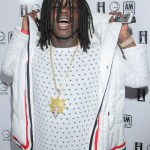 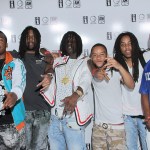 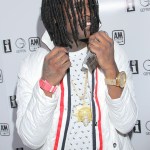 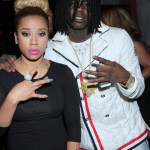 Bio:
Chief Keef (born Keith Cozart in Chicago, Illinois on August 15, 1995) is an American rapper and CEO of his own record label, Glory Boys Entertainment. He shot to fame after Kanye West discovered mix tapes and music videos he posted to YouTube. In 2012, he signed a major record deal with Interscope Records, and his debut album, Finally Rich, was released on December 18, 2012. He has collaborated with household names such as 50 Cent, Young Jeezy, and Rick Ross. Cozart also performed at the 2012 Lollapalooza music festival, and announced in December 2012 that his popular single, “Love Sosa,” would be in the soundtrack to Grand Theft Auto 5.

Best Known For:
Chief Keef is best known for his debut album, Finally Rich, and his legal troubles.

Personal Life:
He served house arrest in January 2011 under charges of Heroin manufacture and distribution. In December 2011 he was arrested again for 3 counts of aggravated assault and resisting arrest. At the age of 16, Cozart fathered his first child. On Jan. 15, 2013, he was sentenced to 60 days juvenile detention after violating probation from a 2011 gun conviction.

Rapper Tray Savage, who was a member of Chief Keef’s record label and born in Chicago, is dead, a new report claims.

Chief Keef was shockingly shot at while outside an NYC hotel on June 2 after a late night out. Here’s everything you need to know about the rapper.

Lil Tay, 9, is about to blow up, and we’re making sure you learn everything there is to know about Chief Keef’s new protégée. You’re going to want to watch this one!

Yikes! Chief Keef could be headed back to jail because a Miami judge has issued a warrant for his arrest! You have see to why the rapper has the police after him less than a month after his absolutely insane mugshot was taken!

Well, this is strange. When Chief Keef was arrested and charged with a DUI on Apr. 9, he didn’t look scared or upset at all. In fact, the rapper appeared to be in a seductive mood as he licked his lips right when cops took his mugshot. Check it out!

After Katy insulted the rapper’s new song, Chief Keef took to Twitter to harshly slam Katy for her comment! Read on to find out what he said.
Another day, another Twitter feud. On May 21, Katy Perry, 28, dissed Chief Keef’s song “Hate Being Sober” on Twitter, and Chief Keef fired back with some pretty violent threats!

The 17-year-old rapper just can’t keep himself out of jail. Only two months after being released from jail for a different offense, Chief Keef was placed behind bars again.
Chief Keef was arrested in DeKalb County, Georgia on May 19 for disorderly conduct, but the rapper, whose real name is Keith Cozart, has since been released.