Angelina Pivarnick wants nothing to do with Mike “The Situation” Sorrentino on the July 21 episode of Jersey Shore: Family Vacation!. The drama started after he spoke to her ex-husband, Chris Larangeira, and shared the conversation with the rest of the Jersey Shore castmates. During the phone call, Chris accused Angelina of leaking Nicole “Snooki” Polizzi, Jenni “JWoww” Farley and Deena Cortese’s speech at her wedding before it aired on the show. Angelina denied doing so, and was pissed at Mike for believing Chris over her. So, she decided to skip the cast trip to El Paso, where Pauly D was DJing.

In this EXCLUSIVE sneak peek at this week’s episode, Angelina calls Pauly to apologize to him for not showing up. Mike jumps in the FaceTime call, and Angelina retorts, “I don’t wanna f***ing talk to Mike. I’m mad at you.” In a confessional, she adds, “I always go to Pauly’s shows. I’m always Pauly’s biggest supporter. There’s no problems between us. Mike…that’s another story.” 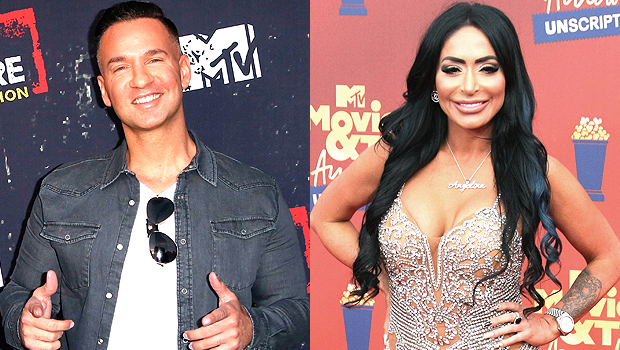 Meanwhile, The Situation seems shocked to see Angelina so pissed. “I’m sorry, did I do something wrong?” Mike asks. At this point, the clip of his phone call with Chris and subsequent meddling is replayed. Eventually, the phone call between Angelina and Pauly ends with Angelina wishing Pauly luck, and when they hang up, the rest of the cast dissects what went down.

“I was not expecting that,” Pauly admits. “It’s gonna be weird when we see her.” Mike agrees that it’s going to be “weird,” and says in his confessional, “I was meeting Angelina’s call with positivity, and she met me with negativity.” JWoww is equally surprised to see how mad Angelina is at Mike. “What did you do?” she wonders.

“I don’t know,” Mike says. “I felt a little disrespected when she did that. Like, ‘Get off the phone?’ Like, who is you?” Mike also defends talking to Chris, adding, “The dude called me! People sent ME the receipts. Whatever it is, like…I didn’t seek any of this out.” Vinny Guadagnino, on the other hand, has a different view of the situation. “This guy Mike has been stirring the pot the whole time,” he laughs. “Mike put himself in the center of this whole drama.”

At the end of the clip, Mike even threatens to bring the “old Situation” back to deal with Angelina. We’ll have to see how it plays out when Jersey Shore: Family Vacation airs on July 21 at 8:00 p.m. on MTV!