Hilary Duff hit the beach in Malibu with her family to celebrate Independence Day and she looked gorgeous in a lilac bikini. The How I Met Your Father star, 34, looked fit and ready to play as she splashed around in the water with her youngest, 1-year-old daughter Mae, in photos that can be seen here. She wore a fun two-piece that featured high-waisted bottoms and a strapless bandeau top. She accessorized with a pair of black sunglasses and a cute straw hat. The mom of three was also seen paddleboarding with her 10-year-old son, Luca. Hilary shares Luca with her ex-husband Mike Comrie and daughters Mae and Banks, 3, with husband Matthew Koma, 35. 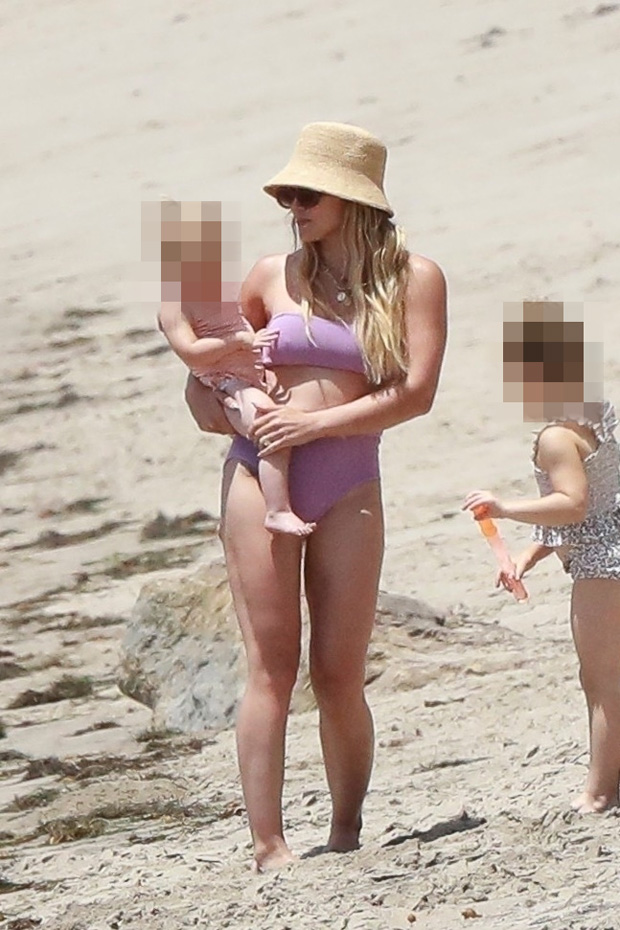 Matthew, 35, who plays in the band Winnetka Bowling League, was not photographed and did not seem to be in the mood to celebrate the Fourth of July. Instead of sharing gleeful pictures of the family outing on July 4, he took to his Instagram to make a political statement and condemn the state of women’s reproductive rights and gun violence in America. He shared a carousel of informative screenshots, the first an answer from Google to a question that asked why Independence Day is celebrated. The next photo showed the dictionary definition of “independence,” which is: “the fact or state of being independent.” The lesson was then followed by several screenshots of news articles centered around reproductive rights being taken away from women and the LGBTQ+ community, gun violence, such as the Uvalde, Tex. massacre that occurred in May, and an article about a homelessness support event being shut down by police.

Matthew is not the only one who made a less-than-enthusiastic statement on America’s birthday. For instance, Kim Kardashian and her sister Kourtney Kardashian protested the Supreme Court overturning Roe V. Wade by reposting a meme on their Instagram Stories that read, “4th of July has been canceled due to a shortage of Independence. Sincerely, Women.” Katy Perry referenced her 2010 hit “Firework” and tweeted, “‘Baby you’re a firework’ is a 10 but women in the US have fewer rights than an actual sparkler smh.”

While Hilary did not appear to post anything on the Fourth of July, she did speak out following the overturn of Roe V. Wade. “Sorry I’ve been quiet. [I’m] kind of in a state of shock since the ruling,” she wrote on her Instagram Story on June 26, per Us Weekly. “[I’ve been] feeling powerless, feeling like since I am a woman, I don’t matter. My life doesn’t matter. It’s a man’s world, still. It’s a horrible feeling.”

Before speaking out about the injustices women face in America, Hilary bravely showed off her body in a nude shoot for the Women’s Health May/June issue. “I’m proud of my body. I’m proud that it’s produced three children for me,” she said during her conversation with the publication, touching on what inspired her to agree to the revealing shoot. “I’ve gotten to a place of being peaceful with the changes my body has gone through. I also want people to know a makeup artist was there putting glow all over my body and someone put me in the most flattering position.”