Kourtney Kardashian and fiancé Travis Barker sported their matching ski masks while enjoying some time on the beach in two new photos she shared to Instagram.

Kourtney Kardashian, 42, and Travis Barker, 46, whipped out some winter clothes for their recent trip to the beach at sunset, which Kourt documented on Instagram on Sunday, January 2. The engaged couple had on matching black Balaclava masks and were all layered up while spending time with two of Kourtney’s children. “Kravis” lovingly posed together for the first photo, which was taken on the sand in front of the gorgeous sunset. The second image featured Kourtney and Travis joined by her youngest son Reign, 7, and daughter Penelope, 9, for a sweet family snapshot.

Travis had his arms wrapped around the Poosh founder for the first picture. The A-list pair twinned in their ski masks, and looked looked pretty comfortable for the dropping temperatures on the West Coast. The Blink-182 drummer bundled up in a black hoodie sweatshirt, while Kourt kept warm in a heavy gray jacket and black sweatshirt. They both stared directly at the camera while locked in their cute embrace.

As for the second photo, Kourtney and Travis briefly broke up their cuddly moment to get Reign and Penelope involved. Travis held Reign in his arms, while Penelope stood in front of the boys and behind her mother, who was taking the group selfie. The 9-year-old, however, decided to look towards the ocean rather than at the camera. Reign and Penelope were similarly bundled up at the beach in cozy sweatshirts. Travis, who popped the question to Kourtney back in October, commented on his future bride’s captionless post, “Family over everything.”

Travis and Kourtney have been loving life since their engagement. Wedding plans for “Kravis” appear to be fairly up in the air, though a source close to the Kardashian family previously told HollywoodLife EXCLUSIVELY that the couple’s kids will be involved in the upcoming nuptials. “All of Kourtney’s children and both of Travis’s are going to be included in their wedding party,” the insider said, “as this is what they both want.” 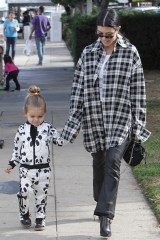 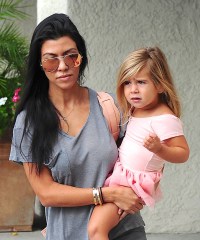 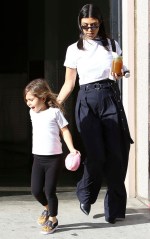 Of course, Kourtney shares Reign, Penelope, and son Mason, 12, with her ex, Scott Disick. Travis, meanwhile, is a proud dad to son Landon Barker, 18, and daughter Alabama Barker, 16, who are his kids with ex-wife Shanna Moakler. He also has a stepdaughter, 22-year-old Atiana de la Hoya, who is Shanna’s daughter from a past relationship with Oscar De La Hoya.