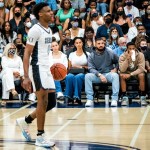 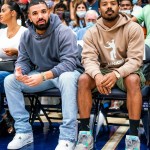 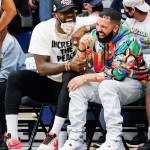 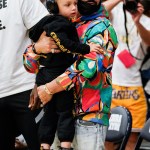 Drake might be one of the biggest musicians on the planet, but the older couple who sat courtside to the ‘Way 2 Sexy’ rapper had no idea who he was – which made Drizzy bust out laughing.

Even if you have 97.3 million followers on Instagram, countless Platinum-certified records, and an immeasurable influence on modern pop culture, you still can be confused for an Average Joe. Such a thing happened to Drake during the Houston Rockets-Oklahoma City Thunder game on Dec. 1. Drake, 35, was seated courtside when the NBA camera panned to him, showing him on the jumbotron. As expected, the crowd at the Paycom Center erupted in applause, but the reaction confused an older gentleman sitting next to the “God’s Plan” rapper. “Are you famous?” he asked Drake, and the question made Drake roll back in laughter. ‘

Drake even took it one step further. He whipped out his camera and took a selfie with the older gentleman and his date for the evening. “My new parents,” he captioned the shot, an ear-to-ear grin on Drake’s face. As it turns out, Renee Stanley – the wife of Jim Stanley, the older man who chatted with Drake — had a vague idea of who their new “son” was. “Well, I knew his name was Drake,” Renee, 71, told The Oklahoman, “but I didn’t know he was a rapper, and I didn’t know how popular he was. But let me tell ya, everybody else around me let me know.”

I love this 😂 @drake and his new Oklahoma parents pic.twitter.com/mh77h7Tc0O

Renee said she was the inspiration behind Drake’s caption. “Just tell everyone we’re your new parents,” she said. “And that’s when my phone blew up, because he did.” She also said that she and her 75-year-old husband are taking the new fame in stride. “We’re laughing and hooting over the fact that we’re called old people,” she said. “We don’t think we’re old, although I guess we are.”

It turns out that one of Drake’s 97.3 million followers is Renee’s grandson, who called her after seeing her on his IG Story. “‘Oh my god, Grandma. I’m following Drake, and I see YOU!’ He almost fell over,” she said. “I’m a big hit with the grandkids.”

Jim said he first broke the ice by complimenting Drake’s coat. Then Renee said she liked his earrings. Then they began to chat hockey, and Renee said that her grandfather was from Quebec. “We just had a conversation like anybody sitting next to you at a game,” Jim said. “It’s just that he’s a big deal and I’m not. … When you think of celebrities sometimes, and how they can be real snobs, he was just an everyday person and was very cordial to us. I appreciate that.” At the end of the game, he got up and kissed Renee’s hand.

Drake’s presence at the game raised a few eyebrows. While Drake is known to root for a wide variety of teams, no one was sure why he was in Oklahoma City. Some speculated that he was there to support his fellow Toronto-native, Shai Gilgeous-Alexander. “We know each other, obviously being from the same city,” he said after the game but clarified that they weren’t that close. “I guess he just wanted to come watch [some] basketball.”