Hours after the 2022 Grammy Award nominations were unveiled, and Miley Cyrus’s name was nowhere to be found, the 29-year-old “Midnight Sky” singer didn’t get upset or call for a boycott of the show. Instead, she tweeted a link to a Best Life article titled “30 Artists Who Haven’t Won Grammys.” Among those listed were Queen, Patti Smith, The Ramones, Jimi Hendrix, Katy Perry, Snoop Dogg, Bob Marley, Nicki Minaj, Bjork, Martina McBride, Diana Ross, Busta Rhymes, The Notorious B.I.G., Iggy Pop, and Journey. After looking at the lists, the snub didn’t seem too bad to Miley. “In good company,” she included in her tweet, along with the “metal horns” emoji. 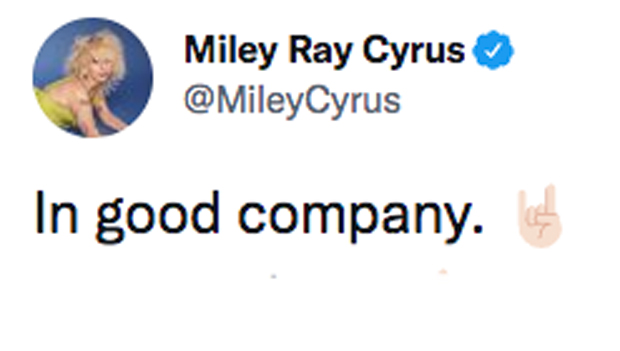 Miley Cyrus could arguably be the biggest snub of the 64th Annual Grammy Awards. Her Plastic Hearts album – released on Nov. 27, 2020, well within the Sept. 1, 2020 – Sept. 30, 2021 eligibility period – reached No. 2 on the Billboard 200, has a 75/100 rating on Metacritic, and contained the Billboard Top 20 hit, “Midnight Sky.” While those numbers weren’t gigantic, it wouldn’t be beyond unreasonable to think Plastic Hearts would score a Best Alternative Album nomination, considering last year’s nominees included Tame Impala’s The Slow Rush, Brittany Howard’s Jaime, and Beck’s Hyperspace.

Ironically, two of the artists in the list that Miley tweeted were nominated in the 2020 Grammys. Abba is up for Record of the Year for “I Still Have Faith In You.” They have to beat Olivia Rodrigo’s “drivers license,” Lil Nas X’s “Montero (Call Me By Your Name”), Billie Eilish’s “Happier Than Ever,” Justin Bieber’s “Peaches,” Doja Cat and SZA’s “Kiss Me More,” Brandi Carlile’s “Right On Time,” Lady Gaga and Tony Bennett’s “I Get A Kick Out Of You,” and Silk Sonic’s “Leave The Door Open” to win.

Nas was also on that list of artists who haven’t won a Grammy. His critically acclaimed King’s Disease II album is up for Best Rap Album. He’s battling Kanye West’s Donda, Drake’s Certified Lover Boy, J.Cole’s The Off-season, and Tyler, The Creator’s Call Me If You Get Lost for the crown.

Other “snubs” this year include Taylor Swift just getting one nod – Album of the Year for evermore – and BTS only getting a Best Pop Duo/Group Performance nod for their mammoth hit, “Butter.” Machine Gun Kelly’s pop-punk album, Tickets To My Downfall, was denied a Best Rock Album nomination or a Best Rock Performance nomination. “wtf is wrong with the grammys,” he tweeted.

Miley’s snub comes one year after  The Weeknd got the snub of a generation after his After Hours album was utterly shut out of the 2021 ceremony. he publicly blasted both the show and The Recording Academy as “corrupt” and demanded transparency. “Look, I personally don’t care anymore. I have three Grammys, which mean nothing to me now, obviously,” he told Billboard in a January 2021 interview, months after the nomination scandal. Despite The Recording Industry announcing changes to the nomination process in spring 2021, The Weeknd said he would boycott the Grammys and never submit his music for consideration again.

Related: Coldplay’s Grammy Wins: How Many The Group Has Won & For What

The Weeknd and Miley are far from the first Grammy snub, and they will not be the last. The Recording Academy has not always gotten it right, as detailed by Vulture’s extensive list of Grammy mistakes and snubs. For instance, Blood, Sweat & Tears’ self-titled album beat out The Beatles’ Abbey Road, Johnny Cash’s San Quentin, and Crosby, Stills & Nash’s self-titled to win Album of the Year in 1970. The Police’s “Every Breath You Take” won Song Of The Year in 1984, beating out two Michael Jackson songs (“Beat It,” “Billie Jean”) as well as Lionel Richie’s “All Night Long,” and Michael Sembello’s “Maniac.” Not to mention, some iconic artists have never won a Grammy.

Plus, some might consider Beyoncé’s whole Grammy experience a travesty. Yes, she’s the artist with the most Grammys of all time, but only one of them comes from the “Big Four” category – 2010’s Song of the Year for “Singles Ladies (Put a Ring On It).” She was never nominated for Best New Artist, and she’s never won Record of the Year or Album of the Year, despite being nominated multiple times.