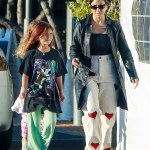 Penelope Disick is ready for spooky season, as evidenced by new photos shared by her mom Kourtney Kardashian. The Poosh founder, 42, documented her 9-year-old daughter’s goth girl Halloween costume on Instagram on October 3. And reader, it is very good.

In the images shared over the weekend, Penelope could be seen in a long black wig and an all-black outfit that consisted of Dr. Marten combat boots, Juicy Couture leggings, a graphic t-shirt, and a beanie. The goth pièce de résistance? Her smudged black eyeliner and DIY face tattoos shaped like a heart and an “x.” Little P even posed with a devilish little smile, one that would make Harley Quinn quake.

Kourtney captioned the post with a series of festive emojis, including a bat and spider. The former reality TV star shares her goth daughter with ex Scott Disick. The two split in 2015 after an on-again, off-again relationship that began in 2005. They also share sons Mason, 11, and Reign, 6, together. The mom of three has already begun decorating for the spooky season.

On Instagram last week, Kourtney shared snapshots of her decor, including a doorway flanked by two massive skeletons and some stylish gothic candelabras. “Tis the season!” she captioned.

Celebrity Families Out On Halloween: Photos 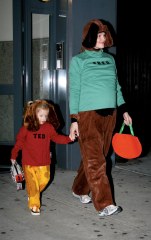 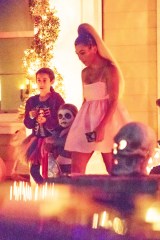 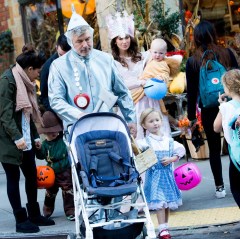 The Poosh founder actually began celebrating the spooky season early last month. On September 10, Kourtney and her musician boyfriend Travis Barker had a date night at Halloween Horror Nights at Universal Studios in Los Angeles. It was a family affair, as the couple were joined by Kourtney’s son Mason and Travis’ children Alabama, 15, and Landon, 17. An eyewitness told HollywoodLife at the time that the duo packed on the PDA during the spooky outing.

“To say they were having a romantic date night would be quite the understatement,” the source told HL. “Travis and Kourt embraced, with him holding her close, holding her hand, and grabbing her behind [as they] headed to the Hill House maze.” The source added, “She got scared a few times and she tackled herself into his arms. Nothing scared him. They were snuggling throughout.”

The date came after Travis swooned over his girlfriend in his interview with NYLON on September 8, crediting her for helping him overcome his fear of flying after surviving a traumatic plane crash in 2008. “It’s still something very new to me, but having something that gives me the strength and hope to be able to overcome things that were so traumatic in my life, it just says a ton,” he said. “She’s definitely that for me. I’m invincible when I’m with her. It’s like I never dreamed, I never even considered flying again.”