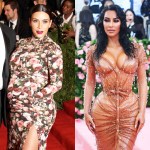 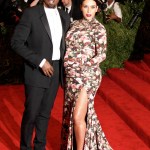 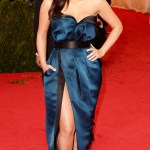 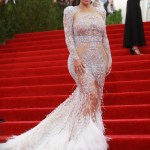 Kim Kardashian showed up to the Met Gala in a black ensemble that covered everything, including her face. She was joined by Balenciaga’s creative director on the red carpet.

Kim Kardashian, 40, sure knows how to steal the show. The A-list stars attended the 2021 Met Gala and they gave her absolute best shot at trying to conceal her identity with a wild fashion choice. Kim rocked an all black outfit that covered her entire body, face included. Kim showed literally no skin in her Balenciaga outfit, with her long-sleeved shirt, pants, gloves and full face mask completely engulfing her body. She also had on black heels, and a black train traveled with the star through the red carpet. Only her long hair — which still matched her outfit —  was free of her attire.

She was joined by Demna Gvasalia, the creative director of Balenciaga, on the red carpet. However, at first, people were convinced that it was actually Kim’s ex, Kanye West, who was walking beside her in a similar all-black look. The mystery man was identified as Kanye at first, but Kim confirmed on her Instagram Story that it was, in fact, Demna.

It was questionable if Kim’s outfit really fit with the American fashion theme for this year’s Met. Kim has actually attended every Met Gala since 2013, and she’s dressed top notch every single time. Two years ago, the mother of four celebrated Camp: Notes on Fashion with a memorable custom-made dress that had a plunging V-neckline and skintight corset. At her first Met Gala appearance eight years back, Kim — who attended the outing with Kanye and was pregnant with their daughter North West at the time  — donned a long-sleeve floral gown with a hip-high slit on the side of the leg. 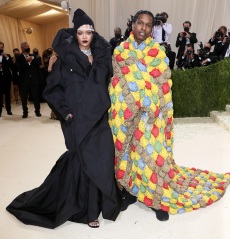 Kim filed for divorce from the legendary rapper in February after seven years of marriage. Since the split, the exes have continued to co-parent their kids North, 8, Saint West, 5, Chicago West, 3, and Psalm West, 2.

Last month, a source told HollywoodLife that Kim and Kanye “have been trying to work things out,” after Kim wore an eyebrow raising white Balenciaga wedding dress during Ye’s Donda Chicago listening event. “They are putting on a united front and are committed to trying to stay together — not sure if that means she will withdraw the divorce papers but they’re taking it day by day,” an insider close to the superstar exes said.