Kim Kardashian, 40, wants fans to know she supports her ex Kanye West, 44, no matter what. The KKW Beauty founder once again made an appearance at his second listening party in Atlanta for Donda — his highly anticipated new album, named for late mom Donda West — on Thursday, Aug. 5, according to TMZ. Just like the listening event on July 22, Kim had their four kids North, 8, Saint, 5, Chicago, 3, and Psalm, 2, in tow at the Mercedes-Benz Stadium. The event was scheduled ahead of the Donda release, which officially drops on Friday, Aug. 6. 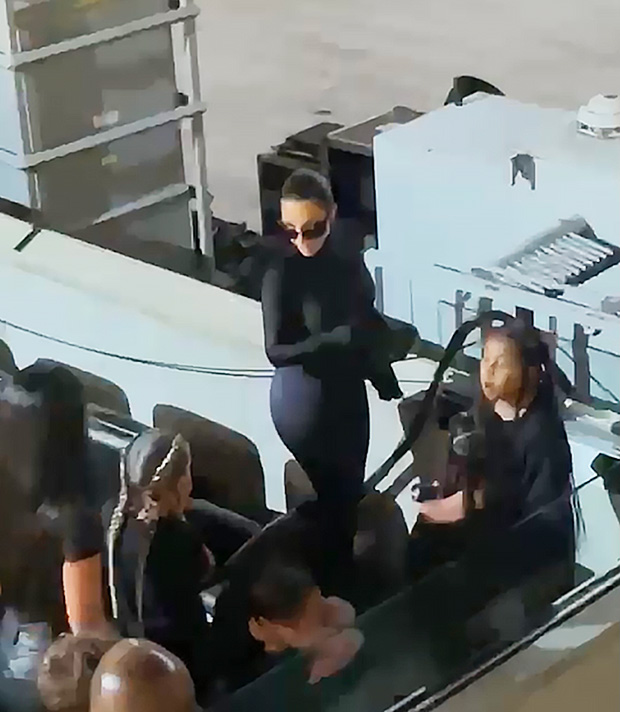 Kim and the kids were all reportedly dressed by luxury fashion label Balenciaga, known to be one Kanye’s favorite designers. Notably, Demna Gvasalia, creative director of the Balenciaga, is also overseeing creative for Kanye’s listening party. Earlier in the evening, the SKIMS founder appeared to possibly tease the outfits with a photo of a gray zippered beanie via Twitter, along with a matching label. Though the image was blurry, a ‘Balenciaga’ label could be read on the item. Close friend and KKW Chief Marketing Officer Tracy Romulus was reportedly also in attendance with her children, who are regularly seen with Kim’s four kids.

The Keeping Up With The Kardashians star turned heads when she appeared at his first listening party on July 22 alongside sister Khloe Kardashian. Kim looked straight off the runway in a skintight red leather ensemble and glitter boots, keeping her eyes hidden behind a large pair of futuristic sunglasses.

Notably, Kanye also wore red for the event, suggesting the fashionable pair possibly coordinated their ensembles. At the event, the Yeezy designer made headlines for a song seemingly inspired by his split from Kim as he repeatedly rapped, “I’m losing my family.” Jay-Z also appeared on the final track on the album, reportedly recording the verse just hours ahead of release.

Kris Jenner, 65, was the driving force behind Kim’s public show of support at the July 22 show, sources previously spilled to HollywoodLife EXCLUSIVELY. “Kris has always drilled in those girls that family is number one. She’s encouraged their happiness but also family unity,” the insider explained. “Kris always instilled that in them and the importance of working on their relationships and having positive ones with the father of their children no matter what. She’s also a fixer and has been instrumental in helping all of her children to have good relationship,” our source also added.