You can take the model off the catwalk, but you can’t take the catwalk out of the model! Heidi Klum rang in her husband Tom Kaulitz’s 32nd birthday by giving him quite the show at a huge dinner party among friends and family on Thursday, September 2. The 48-year old supermodel posted a carousel of photos of the birthday bash on Instagram, including one where she struts down the dining table as only Heidi Klum can.

The Making the Cut judge can be seen in the second photo rocking a white mini sweater dress, complete with an embellished belt and chic black bowler hat, as she walks along the party table delicately decorated with bouquets of sunflowers. Heidi threw Tom an all-white birthday party, as the other three photos from the event showed everyone donning white threads, surrounded by white balloons with pops of color provided by the two cakes brought out for the birthday boy.

Tom’s identical twin brother and German pop star Bill Kaulitz was there to celebrate as well, appearing in three of the four photos posted. The Tokio Hotel singer is seen in the first photo, watching with joy as Tom’s tasty-looking birthday cakes arrive, then posing with Tom for a candid selfie in the third photo, and lastly cozied up with his favorite brother and sister-in-law in the fourth photo. Quite the family affair! 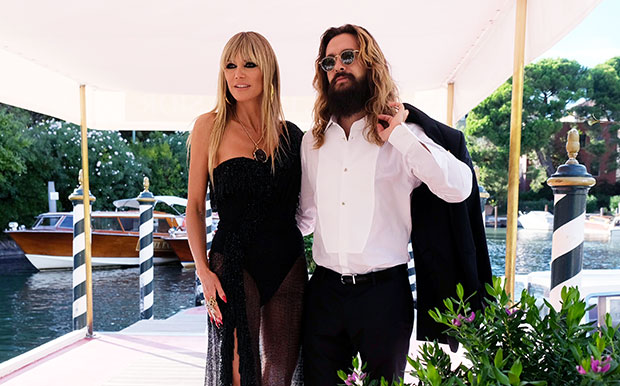 This is the third birthday Heidi and Tom have celebrated as a couple together since the two went public with their relationship in May 2018. The happy couple married a year later in a private Italian ceremony in February 2019. In July and August 2021, the America’s Got Talent star and her rockstar husband were spotted sailing around the Mediterranean on a yacht in Italy and Corisca looking happier than ever. And while we may not be seeing any sizzling pics of Heidi sporting to-die-for bikinis now that the summer weather is winding down, we can only hope the timeless model will grace us with more fierce photos of her this fall strutting down the runway wherever she finds them.