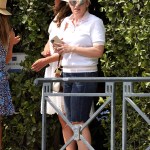 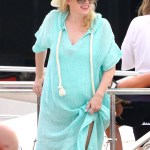 Rebel Wilson perfected a fashionable summer look when she showed off a black top and matching plaid skirt while enjoying a meal and drinks with friends at a fancy restaurant in Italy.

Rebel Wilson, 41, looked incredible during one of her latest outings! The actress donned a black low-cut top under a black jacket and a knee-length plaid skirt with a Gucci belt as she went to a restaurant in Italy, where she’s been vacationing. She paired the outfit with light-colored sandals and carried a tan purse as she was photographed inside and outside the dining location.

The blonde beauty wore her locks down for the occasion and was seen sharing food and drinks with friends inside the restaurant. She appeared to be having a great time as she took in her surroundings at the fancy place.

The outing and stylish look comes just one day after she made headlines for sharing a gorgeous pic of herself rocking a black bikini on Instagram, which can be seen below. She was laying out on a boat in the water and paired the swimsuit with sunglasses and a sun hat that was decorated with a band of black beads. “Med-day ☀️,” she captioned the snapshot. 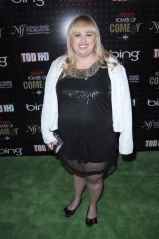 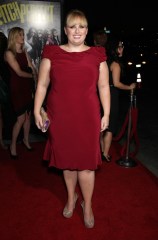 Rebel has been sharing a lot of awesome pics from her summer vacation, which has had her enjoying various locations, including Rome. She toured the Italian city and posed for cheeky photos with epic views while donning a teal T-shirt and white pants. She also wore a white sun hat that added to the eye-catching wardrobe.

When Rebel’s not busy exploring different countries, she’s making her fans laugh with her fun and random social media posts. In a post full of clips, the Australian talent channeled Britney Spears when she dressed up like the pop star in her music video for her hit 90s song “(You Drive Me) Crazy.” She had on a metallic green top with cut-out shoulders that was very similar to Britney’s from the video and black pants. The Pitch Perfect actress revealed the clips were from her upcoming film Senior Year, which is set to be released in 2022.