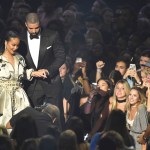 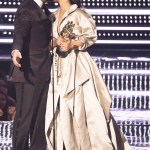 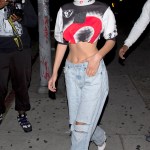 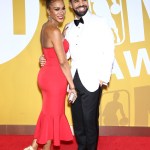 Does Drake have a new girlfriend? It sure looks like it, given the rapper casually rented out Dodgers Stadium for a romantic date night with Johanna Leia.

Now that’s how you pull off a date night! On Thursday night, July 8, Drake, 34, rented out Dodgers Stadium in Los Angeles, Calif. while the baseball team was away to treat Johanna Leia to a romantic dinner. No big deal, right? The rapper and Johanna, a model and mother of Sierra Canyon High School basketball star Amari Bailey, were spotted on the field from overhead by ABC 7. Chris Cristi, a helicopter reporter for the outlet, snapped photos of the pair on their romantic date night, which can be seen HERE.

In the pics, Drake and Johanna can be seen sitting next to each other at a white table near the dugout on the third-base side. The table was covered with a white table cloth and filled with several dishes and flowers. A personal bartender was situated at another table nearby to seemingly serve the couple drinks, the photos showed. Johanna also appeared to be wearing her very own personalized Dodgers jersey!

This is not Drake and Johanna’s first outing together (though it certainly is their most memorable yet!). In June, Johanna sat with Drake and Michael B. Jordan at a Sierra Canyon game to watch her son Amari, 17, play. In a video shared by the Bleacher Report, the trio can all be seen standing together and loudly cheering for the team. LeBron James’ son, Bronny James, 16, also plays for Sierra Canyon.

Drake has enjoyed a whole bunch of date nights as of late. On June 10, he arrived at a party in Hollywood with a mystery woman — who very well may have been Johanna. Drake was clad in tan trousers, a white T-shirt and a light-wash denim jacket for the outing, while his gorgeous date was rocking a pair of skintight high-waisted black trousers with a cutout top tucked in. A few weeks prior, on May 27, Drake was out to eat at Avra restaurant accompanied by a gorgeous brunette woman. And on Apr. 10, he was out with yet another date when he had dinner at Craig’s restaurant in LA.