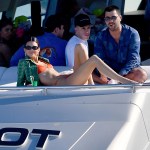 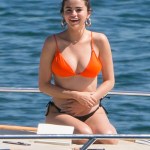 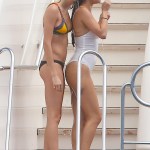 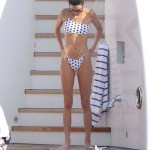 Brittany Matthews got comfortable with her fiancee, NFL quarterback Patrick Mahomes, as the two vacationed in Mexico just months after having a baby girl.

Brittany Matthews, 25, and her NFL player fiancee Patrick Mahomes, 25, are kicking off the summer in style. The couple partied on a boat in Cabo San Lucas on Monday June 28, only four months after their daughter, Sterling Skye Mahomes, was born and Brittany posted pictures of herself with the Kansas City Chiefs quarterback to her Instagram to, well, show off! In one picture, Brittany looked stunning in a sexy orange bikini, accessorizing with subtle gold bracelets and a large pair of sunglasses. Meanwhile, Patrick was shirtless and sported a red bathing suit, a white backwards hat, a crucifix necklace, wristbands, and what appeared to be a FitBit.

In the second shot, Patrick pulled Brittany in close for a romantic kiss. The pair’s daughter was likely just off camera, as Brittany captioned the picture, “Us and Ster.” Brittany shared a few other pictures from their trip on her Instagram Stories. It looks like they took the trip with loved ones, including Patrick’s TikTok star brother Jackson Mahomes, 21. In another story, Brittany posted a picture of the whole family, with her holding Sterling and Patrick leaning in close, wrapped in a towel. She wrote that she was “just pumpin’ and mom-in'” in the sweet shot.

It’s nice to see that Patrick and Brittany are still finding time to have fun after Sterling was born. Since their daughter’s birth, the couple have been photographed cozying up to each other. Brittany has also been showing off some of her amazing outfits. The new mom also posted an adorable video, showing that sometimes Sterling accompanies her during her workouts. The clip shows her doing hip exercises while pregnant, concluding with her doing the same exercise while coddling Sterling.

Even though they’ve been together since high school, Brittany has only been engaged to the 2020 Super Bowl Champion and MVP since September 2020. In April 2021, Brittany shared a heartfelt Instagram post to commemorate the couple being together for nine years. She wished her fiancee a happy anniversary and called Patrick her “favorite human.”