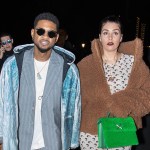 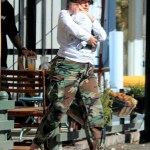 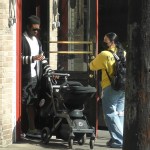 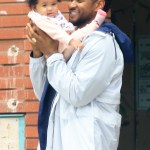 Ahead of the birth of his fourth child with partner Jenn Goicoechea, Usher shared a rare pic of his youngest daughter, Sovereign Bo.

Proud dad Usher shared a rare picture of his youngest daughter on social media on Monday, June 14. The singer, 42, shared a post on Instagram with 8-month-old Sovereign Bo, whom he welcomed with partner Jenn Goicoechea in September 2020. In the snapshot, little Sovereign — donned in the ultimate watermelon-print bib — is affectionately staring at her dad, while Usher returns a warm smile.

“Caption this,” the singer captioned the post. The intimate moment follows the news that Usher and Jenn are expecting their second child together. Back in May, Jenn debuted her growing baby bump at the iHeartRadio Music Awards alongside Usher. The new baby would be Usher’s fourth child; the “Yeah!” singer also shares two other children, Usher Raymond V, 13, and Naviyd Ely Raymond, 12, with ex-wife Tameka Foster.

Sovereign made her TV debut in November 2020 when dad Usher made a virtual appearance on The Ellen DeGeneres Show. The singer revealed to host Ellen DeGeneres that the toddler arrived earlier than expected. “She was scheduled to be a Scorpio but decided she had a different plan,” Usher said. “Libras, you know, they kinda have their minds made up what they wanna do.”

When Ellen noted that Sovereign looked like a “porcelain doll” and “doesn’t even look real,” the singer joked, “You believe that until you have to change her diaper!” In another interview with Extra last month, Usher explained the meaning behind his daughter’s unique moniker. “Sovereign, man, is such a beautiful word and name to me,” Usher said. “You know, a supreme ruler is obviously the defined name.”

The singer added,  “She’s definitely ruling the household, but Sovereign Bo — Bo is at the end of it, so [she’s] my little ‘reign-bo.’” Little Reign-bo will certainly be a great older sister one day.