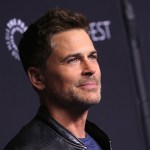 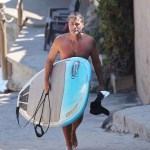 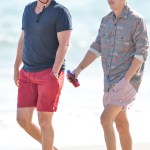 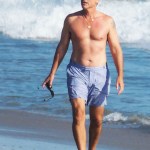 Rob Lowe was spotted walking barefoot on the sand with his 26-year-old son John at a beach near his home in Montecito, CA and appeared relaxed while wearing casual attire.

Rob Lowe, 57, and his son John, 26, made onlookers do a double take over the weekend when they walked side by side on a beach in Montecito, CA. The lookalike duo wore casual clothes that included a dark blue T-shirt and red shorts for Rob and a gray button-down top with orange patterns and light purple shorts for John. The proud dad also wore sunglasses and a sun hat.

They both appeared to be relaxed as they enjoyed their stroll by the water and at some points, gave glimpses to the camera. John, whose mother is Rob’s wife of 30 years, Sheryl Berkoff, 51, was holding a bottle of a red-colored beverage and was highly reminiscent of Rob when he was in his 20s.

Rob’s outing with John comes after he wowed when he went shirtless during a different outing last month. The hunk, who also shares son Matthew, 28, with Sheryl, visited a Santa Barbara beach on Apr. 3 and was photographed splashing around in the water while showing off his impressive muscles. He wore red and gray swim shorts and appeared relaxed while smiling at the camera as he walked out of the water.

When Rob isn’t spending time with family or in the water by himself, he’s working hard while filming the show 9-1-1: Lone Star. The second season of the series started airing in Jan. and the talented star rang in his 57th birthday in Mar. while on set.

Before that, Rob made headlines for reprising his role as Chris Traeger on a Parks and Recreation reunion episode, which aired last month. He shared a video announcing the news beforehand and admitted the cast shot the special on their iPhones due to the COVID-19 pandemic. “Yes, it is literally true. The Parks and Rec gang is back next Thursday,” he said in the video. “We shot a brand new episode totally in secret on our iPhones. It was literally pretty hard, pretty hard to do. The whole gang’s back.”