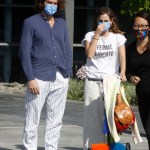 ‘Harry Potter’ alum Emma Watson has stepped out with her boyfriend Leo Robinton, while rocking a comfy sweater and pajama-style pants.

Emma Watson has made a rare public appearance with her boyfriend Leo Robinton, amid swirling engagement speculation. The Beauty and the Beast star, 31, was spotted out and about in Los Angeles on May 15, with her boyfriend of almost two years. She cut a casual figure in a grey sweater and checked trousers reminiscent of pajama pants. The Harry Potter alum also rocked black plimsolls as she styled her freshly-chopped locks in messy waves.

The actress went makeup free and appeared to be in high spirits as she chatted to Leo, who looked equally dressed down in a white tee and skinny jeans. He paired the casual ensemble with brown loafers, as he donned a beige protective face mask. In the pics, which showed them leaving a pharmacy after running some errands, Leo carried bottles of Aspirin and vitamins, as well as a Shamwow cloth.

The pics come just a couple of months after Emma sparked speculation that she could be engaged, after she was spotted wearing a ring on that finger. The pair were photographed after returning from a sunny getaway to Mexico. She rocked a white tee which read, ‘Femme Liberte’, loose beige pants, and a modest ring on her wedding finger.

The notoriously private A-lister was first publicly linked to Leo when they were pictured kissing outside Gail’s Bakery in Notting Hill in London in October 2019. However, “Emma and Leo did everything in their power to keep their relationship private,” a source told the Daily Mail at the time, who added, “After they were pictured kissing in October Leo removed himself from all social media in an attempt to protect their romance.”

The photos came just a few months before Emma opened up during a rare interview with British Vogue, in which she said she was going “on dates,” but was happy not being in a romantic relationship. “I never believed the whole ‘I’m happy single’ spiel. I was like, ‘This is totally spiel.’ It took me a long time, but I’m very happy [being single]. I call it being self-partnered,” Emma revealed during the interview.