Phoebe Bridgers made a smashing ‘Saturday Night Live’ debut — quite literally! She smashed her electric guitar at the end of her performance, sending sparks flying.

Phoebe Bridgers ended her debut performance on Saturday Night Live with a bang when she smashed her guitar on an amplifier. Fans of the 26-year-old Grammy nominee called her segment on the February 6 episode of the long running show “totally iconic”. Phoebe sang two tracks from her 2020 album, Punisher: “Kyoto,” which she performed while rocking a black skeleton onesie, and “I Know the End.” She closed out the segment with a guitar solo, a loud scream, and a guitar bashing.

did phoebe’s guitar write this https://t.co/iFFJKbZUtS

Fans quickly took to Instagram and Twitter to applaud the young indie hitmaker. “I’ve never heard of her before but tonight made me a fan,” one user wrote, while another noted, “The SCREAM …… absolutely iconic.” While some social media users criticized her performance, or called it “extra”, others noted that men were regularly applauded for rock and roll-style performances. “Pete Townshend smashes a guitar: ‘That’s rock and roll man!’ Phoebe Bridgers smashes a guitar: ‘She’s nuts!’,” one twitter user wrote, commenting on the “sexist” undertones of others’ critiques. 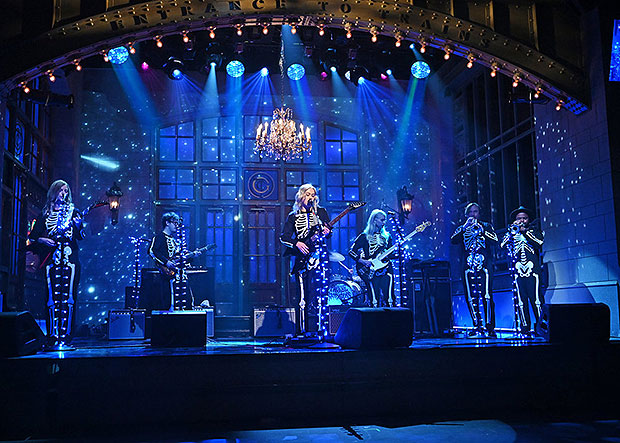 Earlier in the show, Dan Levy, 37, had a Schitt’s Creek moment with his dad Eugene Levy, 74, while making his hosting debut. The American Pie actor appeared in a plastic “isolation box” backstage as Dan toured the halls at 30 Rock. “I mean, honestly — just to get to walk these halls is such a thrill,” Dan said as he passed staff members in protective white hazmat suits. “Oh, wait — Dad?! You came all the way from Los Angeles?” Dan said as Eugene attempted to explain. “Wow, look at you! Yeah, I flew in to wish you luck tonight. But because I travelled, I’m now in this isolation box,” he laughed.

The Schitt’s Creek actor then questioned, “You flew all this way to watch the show from a weird box?” as Eugene explained he “didn’t know about the box at the time — I found out about it when I landed.”