What are you wearing, Drake from State Farm? pic.twitter.com/t1MFQqwpcF

The 30-second commercial — which the insurer teased with two pre-game spots — shows the brand’s famous spokesperson, Jake, sitting on the set of a State Farm commercial with Rodgers and Mahomes. The trio are supposed to be vetting their prospective stand-ins. While Aaron awaits his on-screen double, a man who looks nothing like him tries to shoot his shot to be in the commercial.

“Jake from State Farm, you couldn’t find a stand-in that looked anything like me?”, Rodgers asks while a man with long curly hair and a cheese hat on his head says to the star QB, “Look! I’m you!” That’s when Mahomes chimes in with a similar comment: “Have you seen mine?” he asks, while pointing to Rudd, who’s rocking the same beige, black and white sweatshirt as the expectant dad. “It’s like looking in a mirror,” the actor says while he attempts and fails to throw a Mahomes-level pass. Yet, Rodgers jokes, “Now, that one makes sense” — a little QB humor. 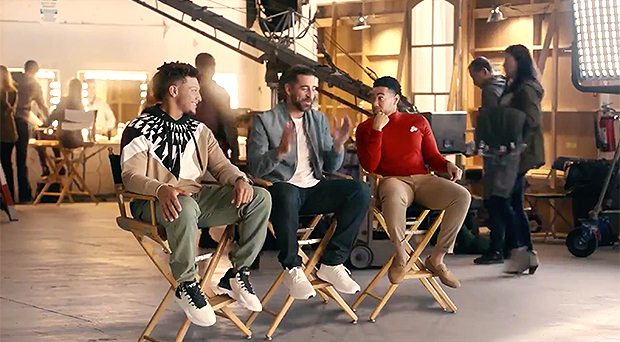 Jake goes on to note that he “doesn’t even have a stand-in,” to which Mahomes looks up and asks, “Hold on, is that Drake?” The rapper, who’s dressed in the same red top and khaki pants as Jake, is at he craft service table eating an apple. “That’s right, it’s Drake from State Farm,” he says in a deep voice, while walking toward the camera. Drake sported his signature heart-shape in his hair. The hitmaker, hilariously went back and forth mimicking Jake’s known line: “Like a good neighbor, State Farm is there.”

State Farm released two separate teasers ahead of the big game spot — both of which showed Jake hinting at the new State Farm ambassador. “Every football fan knows Team State Farm. We got Rodgers. We got Mahomes. And this Sunday, we’re adding another elite talent to the roster,” Jake says in the 20-second spot.

The second teaser, which shows a mockup game plan with photographs of Rodgers and Mahomes, shows Jake on the phone to someone “busy working on the new album.” In mid-January, Drake announced the postponement of his forthcoming Certified Lover Boy album, which was initially set for release that same month. The rapper said he’s been focused on his recovery from a knee surgery he underwent in later 2020.