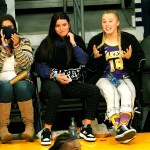 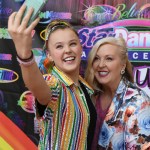 Just weeks after coming out as gay, JoJo Siwa confirmed she’s dating someone who helped push her to be open with the public about her sexuality.

JoJo Siwa, 17, has a very special woman in her life! The Nickelodeon star, who recently came out as gay, revealed that she has a girlfriend during an interview on The Tonight Show Starring Jimmy Fallon on Feb. 3. “I do have the most amazing, wonderful, perfect, most beautiful girlfriend in the whole world,” JoJo gushed. “It’s not something I’m ashamed of. I just haven’t shown the Internet yet.”

In fact, it was this unidentified girlfriend who pushed JoJo to officially come out by posting a photo of herself wearing a t-shirt that read ‘Best. Gay. Cousin. Ever.’ Fans had already begun speculating about the teenager’s sexuality due to a TikTok of her singing along to Lady Gaga’s “Born This Way,” but at that point, she had not directly confirmed that she was gay. “I took that picture a week before and I posted it on my close friend’s Instagram story — all my friends and family already know,” JoJo explained. “So after the “Born This Way” TikTok, I was on FaceTime with [my girlfriend] talking about all the love that came in but I still hadn’t actually confirmed it. So I was like…I kind of just want to post this picture on my real story. And she was like, ‘Do it!'”

My cousin got me a new shirt pic.twitter.com/DuHhgRto7b

JoJo also had encouraging words for those who are having a harder time with coming out than she did. “My thing with coming out is that it can be a scary thing,” she admitted. “Of course, not everyone in the world is going to accept it right now, but there are so many people who are going to accept it right now. Let’s say a million don’t accept it — that’s a lot of people. But there’s a hundred million who do! A hundred million is a lot of people. Always keep that in mind.”

As for her mysterious girlfriend, JoJo didn’t give too many more details, except to reveal that they’re “long distance” and “on the phone literally 24/7.” In fact, right before JoJo’s interview with Jimmy, she was on the phone with her girl. “I was like, that’s a really big risk I took my posting that, and she was like, ‘Why, because you could’ve lost everything?'” JoJo said. “And I was like yeah — but if I lost everything that I created because of being myself and loving who I want to love, I don’t want it. That’s not what I want if I can’t love who I want to love. That’s one of the most important things to me. About ten minutes before this interview, I was on the phone with [her] and I started crying. I’m like…I’m just so happy I get to share what makes me happiest with the world. It makes my heart so happy.”

For JoJo, the support has been overwhelming. “Literally everyone and their brother messaged me, called me, texted me, send me an Instagram message, tweeted me — it was that most love I think I’ve ever received,” she gushed. “The coolest thing about it was showing the world the last little piece of me they haven’t seen yet. It was awesome.