One year drug-free! Mama June Shannon has had a rough road when it comes to her battle with substance abuse. But the reality star has reached the milestone of being one full year sober with no setbacks. She says she feels so much “gratitude” about where her life is now that she’s clean. Things were so bleak for the WE tv star that in a June 2020 episode of  Mama June: Family Crisis, she admitted to eldest daughter Lauryn “Pumpkin” Shannon, 21, that she and boyfriend Geno Doak were doing “a couple ounces a day,” of meth and that “Our habit was $2,500 a day, if not more.” June was so broke she sold the family home and lived out of her car. But now she’s celebrating completely turning her life around and how she now wants to work with others in getting recovery treatment.

In a photo June posted to Instagram on Jan. 27, she looked happy and healthy, with clear skin, shoulder length blonde hair and a big smile on her face. She stood back to back in solidarity with Geno, as they clasped hands from behind, celebrating how far they’ve come.

“As I sit here this afternoon I’m so full of gratitude that we have made it one year with no relapses when so many of the people we know have due to this crazy pandemic going on. And I think back to where we was 1 year to day at this time. We had started staying in our car, staying at a truck stop in Jackson, GA and was just trying to figure out where we was going to be able to make money for our next high, or even food and gas,” the 41-year-old began in the caption. That ended up being the couple’s turning point with drugs.

“Well we didn’t get high that day, and then the same night we reached out to our production team and said ‘hey we’re ready to go to treatment the next day.’ We were put up in a hotel for two days so things could get worked out for us to go to treatment,” June explained, though she wanted one more high. “We honestly was kind of waiting on a payment to come through our account because we only had $1.75 in our account and we were thinking about getting high one last time,” she confessed about her and Gene’s final fix hopes. 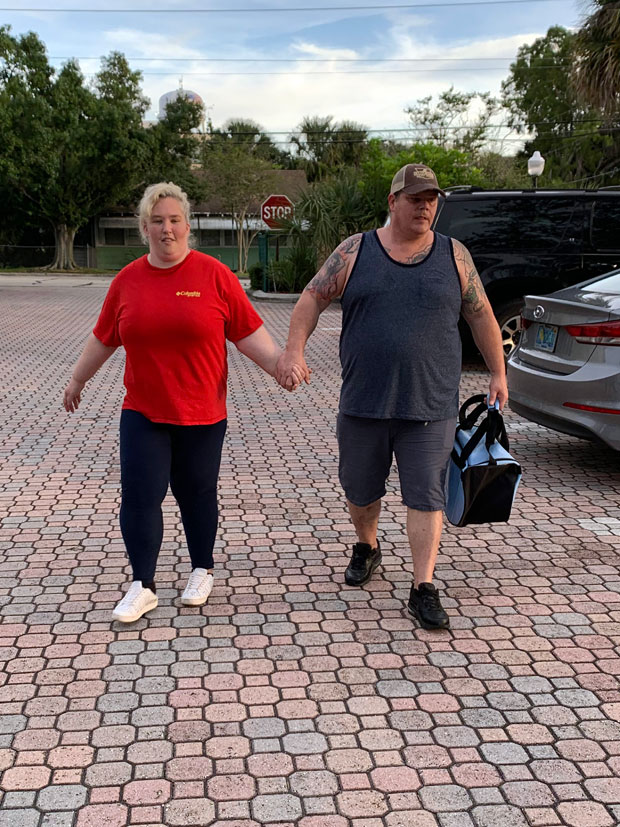 Mama June Shannon and boyfriend Geno Doak are celebrating one year of sobriety after their drug addiction left them living in a car. Photo credit: MEGA.

“Well I guess it wasn’t meant to be, because we actually got on a plane February 1 and headed down to Banyan (treatment center) in Stuart (FL),” June continued, adding that days after their arrival in treatment, the money that they were hoping for to use drugs with finally dropped in the couple’s account. “So I guess that was God’s way of showing us that it was meant to be for us to get clean and I’m so very thankful that that happened.”

The couple decided at around three weeks in to make the commitment to getting clean for good. “After being in treatment for 23 days we decided at the last minute that we would stay here in South Florida. On the 25th day, we left Banyan in Stuart and jumped on a plane went to Atlanta.” Once there, the couple spent the night, got their car and drove it down to south Florida the next morning, instead of returning to a life of drug use and living out of their vehicle. 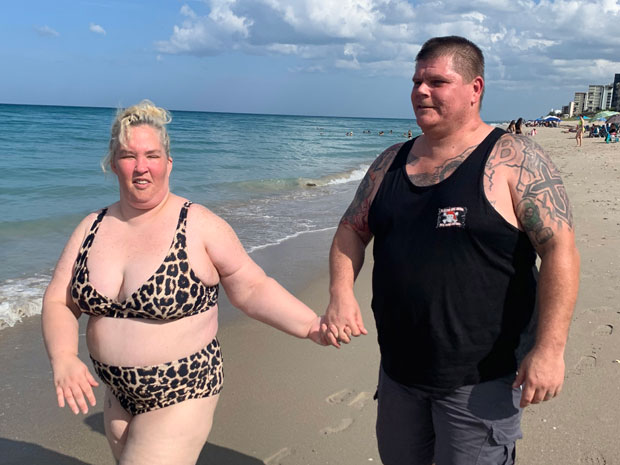 Mama June and boyfriend Geno Doak have now made south Florida their home as they live a life free of drugs. Photo credit: MEGA.

“We have made it our home for the past year now,” June said of the south Florida area. “The goal is since we have hit a year and we have helped so many people get into recovery, helped families that are struggling with someone that has an addiction to understand some of what may be going on in the (addict’s) mind. Just being able to listen to people during their journey…it has been so rewarding for myself to listen and be able to connect with so many of y’all,” June revealed.

June now says she plans to work in a treatment center helping others get clean and sober and live better lives. “Like I tell everybody, I may not have all the answers but I’m here to listen it to you and not judge. It honestly has helped me so much in my recovery journey. So now my goal is to work inside of a rehab facility to be able to watch people come in at their lowest — where I was a year ago — and blossom into new amazing person,” she wrote, adding “And know my inbox is always open” with the hastags, “#1yrclean #gratitude #rehabworks.” Now if she can get her 15-year-old daughter Alana “Honey Boo Boo” Thompson back, as she went to live with June’s eldest daughter Pumpkin following June’s 2019 drug arrest.