Update 01/22/21: “Today we lay to rest, and honor the life of my brother, a true angel of light, an extraordinarily unique soul unlike any who have come before,” wrote Peter Brant II on Thursday, Jan. 21. Peter II, 27, shared a photo of Harry laying on the floor next to socialite Gaïa Jacquet-Matisse, and memorialized his brother in the Instagram post’s caption. “This photo taken on his last day, shows the eternal beauty he will forever hold. It is impossible to express the devastation I feel for the loss of one with whom I shared not only a lifetime of beautiful memories, but with one who cared so deeply for my own happiness, was so devoted to my personal comfort, It is the loss not only of a brother, but of a best friend, my other half. My heart shatters to think we will never see that dear sweet face again. @harry_brant” 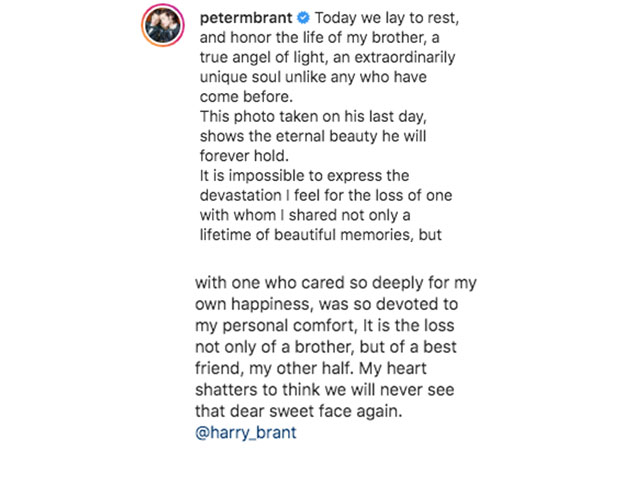 Original: Lily Brant, 16, is grieving after the death of her brother, Harry Brant, 24. The teenager took to Instagram on Jan. 19 to post a sweet message to her big brother after the pair’s parents, Stephanie Seymour and Peter Brant, confirmed that he had died. Along with her message, she shared a sweet throwback photo of Harry holding her in his arms from when they were much younger. 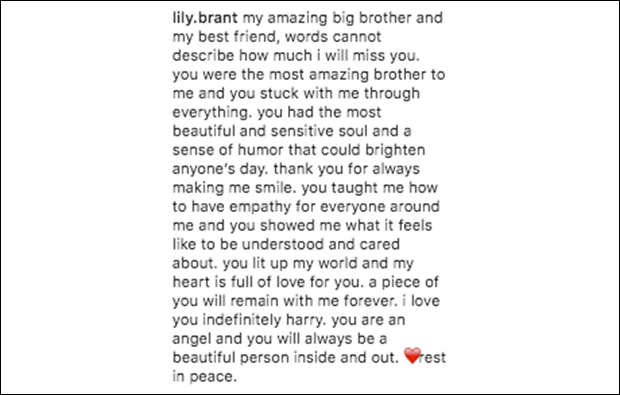 “My amazing big brother and my best friend, words cannot describe how much I will miss you,” Lily wrote. “You were the most amazing brother to me and you stuck with me through everything. You had the most beautiful and sensitive soul and a sense of humor that could brighten anyone’s day. Thank you for always making me smile.”

“You taught me how to have empathy for everyone around me and you showed me what it feels like to be understood and cared about,” Lily added. “You lit up my world and my heart is full of love for you. A Piece of you will remain with me forever. I love you indefinitely Harry. You are an angel and you will always be a beautiful person inside and out.”

Stephanie and Peter, who have been married since 1995 and also have a 27-year-old son named Peter II, broke the news about Harry’s death by releasing a statement on Jan. 19. “It is with enormous sorry that we share with you the news that our beloved son, Harry Brant, lost his battle with addiction and died due to an accidental overdose of prescription medication,” they said. “Our hearts are shattered.”

The statement also revealed that Harry was “just days away from re-entering rehab” at the time of his death. “[Harry] achieved a lot in his 24 years,” the message concluded. “But we will never get the chance to see how much more Harry could have done.” Although Harry was well known due to his famous parents, he also forged his own path on the New York social scene, and achieved notoriety due to his top-notch sense of style. He also created a unisex makeup line with his big brother, Peter.

Related: Lisa Marie’s Family Is Live-Streaming Her Memorial: How To Watch