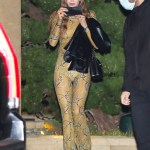 Amelia Hamlin has been glowing amid her romance with Scott Disick. She shared a sexy selfie in a tiny ab-baring top after their return from New Year’s in Cabo.

Amelia Hamlin seems to know all eyes are on her now that she’s  Scott Disick‘s new squeeze. The 19-year-old got the added assurance boost about the status of their relationship when the 37-year-old father of three took her to Cabo San Lucas, Mexico for a romantic New Year’s getaway. Now that she’s back home, Amelia is seeming more confident than ever when it comes to flaunting her sexiness on Instagram. She did just that with an IG stories selfie on Jan. 7, wearing just a black bra top and short leggings.

Amelia held her peach encased phone up to cover her face as she snapped a mirror selfie. The picture showed off her incredible figure, as she was wearing just a black bikini-like top that flaunted her curves. It also highlighted the teen’s trim waist and flat abs. Amelia added a pair of black bike shorts to display her toned legs, and accessorized with a silver bracelet and black sunglasses atop her head, even though she was indoors.

Her top was nearly identical to the black bikini she wore in an IG post that Amelia shared with fans on Jan. 3. It showed her amazing swimsuit figure while standing next to an outdoor shower. The post came with a cryptic caption, as Lisa Rinna‘s daughter wrote “Miss u already.” She could be talking about Cabo…or Scott!

Scott and Amelia first turned heads when they arrived together at a Halloween party on Oct. 31, 2020. It came less than two months after Scott and girlfriend of nearly three years, Sofia Richie, 22, officially ended things. The Keeping Up With The Kardashians star isn’t ready to jump back into anything super serious though, and he and Amelia are just enjoying each other’s company.  As we previously told you EXCLUSIVELY, they “like each other and have great chemistry,” and “make one another smile and laugh, but it’s not like she’s meeting his kids tomorrow or anything like that,” a source told us of the couple. But hey, they’ve made it into 2021 together, so it should be interesting to see where things go in the new year.