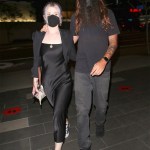 Kelly Osbourne worked a new accessory with her look on Tuesday, November 17, sporting an eye patch to protect one of her eyes following an injury she suffered during a makeup session! Check out the pics!

Fans have always known that Kelly Osbourne is a total fashionista, but now she’s really stretching her style to new lengths. While out on the town on November 17, the former Fashion Police host, 36, wore a black eye patch over one of her eyes following a makeup-related injury. The starlet also wore a black face mask to prioritize her health, as well as those around her, amid the coronavirus pandemic, and fashioned a black, button-down dress with a cappuccino-hued coat featuring a Chanel broach.

Kelly’s signature purple hair was tossed-up in a beautiful, retro style, as she and Griffin Johnson made their way to Craig’s in West Hollywood for dinner with pals! Although Kelly was seen sporting the eye patch in public last night, this isn’t the first time that fans may have seen the star in her new accoutrement. On her Instagram Story, as well as on her own feed, Kelly has shown her over two million followers her new look.

In a previously published Instagram post from just a few days ago, Kelly not only wore her eye patch, but also a protective face shield while hanging with pals. “This is some 2020 s—,” Kelly said in the clip, voguing for her camera as she captured her mug with her new accessory. Kelly even doubled down on the vibe in her video by captioning her post, “All I can say is 2020.”

Prior to her night out and her latest IG post, Kelly took to her Instagram Story to reveal what exactly had happened to cause the injury. “When your makeup artist says, ‘Don’t move,’ don’t move. Don’t move at all,” she said in a clip, according to Entertainment Tonight. “I’m currently on my way to the eye doctor because I scratched my f–king eyeball on a mascara wipe.”

Luckily, Kelly clearly got the help that she needed and is well on her way to recovery! The TV personality has never been one to mince words or be completely reticent to share some of her embarrassing moments with fans. But recently, she’s been totally feeling herself after dropping 85 lbs. following a two-year journey that began with gastric sleeve surgery in 2018. As Kelly’s eye continues to heal, we cannot wait to see more of the star out and about!