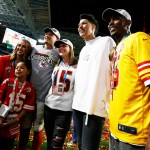 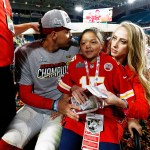 Brittany Matthews and her baby bump were the stars of Patrick Mahomes’ game on Nov. 8 — although her fiance led the Chiefs to a victory over the Panthers! She modeled her bump in a black dress that she swears is perfect for pregnant mamas!

Bumpin’ and beautiful! Brittany Matthews is glowing in new photos from fiance Patrick Mahomes‘ NFL game on Sunday. The pregnant fitness trainer, 25, cradled her baby bump in a tight black dress as she watched her future husband and his Kansas City Chiefs team defeat the Carolina Panthers 33-31. Brittany was all smiles in a series of photos she shared to Instagram, acknowledging the couple’s already eager (unborn) baby girl.

“Baby girls starting to make an appearance, she told me she can’t wait for game daysss,” Brittany wrote in the caption of her post. She posed in front of a Chiefs logo wall in a pair of pink Louis Vuitton high-top sneakers. Patrick’s brother, Jackson Mahomes, who was also in attendance at Sunday’s game, commented, “The Best pic of the year so far!”

Brittany made sure to document the Super Bowl LIV MVP‘s victory over the Panthers on Instagram. She shared a number of videos from stadium suite, where she along with her and Patrick’s families were sitting. Everyone was decked out in red and yellow Chiefs gear — meanwhile, Brittany wore a jean jacket with Patrick’s #15 on the back, over a black dress by Balance Athletica.

“Everyone needs this dress, Literally can wear it 100 different ways. I’m wearing an XS (Pregnant mamas, this dress is for you),” she wrote on top of the same baby bump photo on her Instagram Story. In another slide, Brittany defended herself against critics who questioned why she wasn’t wearing a mask amidst the COVID-19 pandemic.

“To all the mask haters yes I have a mask, yes I wear one when it’s required/around people that haven’t been tested, yes I’m pregnant and not an idiot,” she wrote under a selfie of herself wearing a black face mask, adding, “Thank you,” with a pink heart emoji.

The expectant couple, who also celebrated their pup Silver’s 2nd birthday on Sunday, has a lot to look forward too. On September 29, Brittany announced her pregnancy in an Instagram post with Patrick, 25, in which she held up a sonogram photo while he hugged her belly. The exciting news came just a few weeks after the high-school sweethearts’ engagement on September 1. Patrick surprised Brittany with a stunning (estimated $150k) square-cut diamond ring — right after he received his Super Bowl LIV ring during a formal ceremony with the Kansas City Chiefs in Missouri. Then in October, the parents-to-be revealed they are expecting a baby girl.