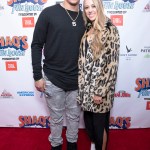 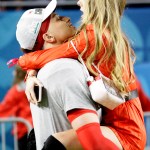 Brittany Matthews posed with her cute baby bump while cheering on the Kansas City Chiefs. Her fiancé, Patrick Mahomes, was playing against the Las Vegas Raiders!

Patrick Mahomes‘ fiancée, Brittany Matthews, is a stylish mama! On Oct. 12, the 25-year-old beauty shared new photos of her baby bump which she rocked with a stylish ensemble: Balance Athletica’s $62 Linear Midi Skirt in “midnight,” and a cropped tee that repped the Mahomes name. Brittany was not only showing off her budding baby bump, but her support for Patrick as well, who was playing with the Kansas City Chiefs against the Las Vegas Raiders.

Brittany’s photos were snapped at a private cheering room inside the Arrowhead Stadium in Missouri, where her beau was facing off on the field against the Raiders. The Chiefs ended up losing to the Raiders, but fans weren’t preoccupied with the results of the game — instead, they were raving over Brittany’s bump! “Most adorably little bump [heart eye emojis] So many of us are over the moon excited for your new adventure! Congrats again [smiley face emojis],” one fan commented, while another couldn’t get over Patrick and Brittany’s adorable love story: “You are going to look so cute with a baby belly. I just love y’all’s story. Together since high school when NFL was just a dream. So glad you guys get to live it together.”

The NFL star’s pregnant fiancée was accompanied by a few friends, whom she also posed for photos with! In one of the pictures, Brittany even held at her hand to put the spotlight on the giant, oval-cut diamond ring that Patrick proposed to her with in September. The center diamond on the ring was estimated to be “roughly six carats,” and the flashy love token was estimated to be worth around “around $100-150k,” which Shannon Delany-Ron, Director of Communications for JamesAllen.com, told HollywoodLife.

A few weeks after the engagement, Patrick and Brittany had even more happy news: they were having a baby! To break the announcement, Patrick shared photos from his gorgeous maternity photo shoot with Brittany, in which they revealed a sonogram of their first ever child together. We can’t wait for even more maternity photos to arrive!