No, Jennifer Garner is not pregnant — and she let fans know it after several Instagram users wondered if her photo of two pumpkins was a special baby announcement!

Jennifer Garner, 48, got in the Halloween spirit by carving some pumpkins over the weekend. She proudly uploaded a picture of herself holding up her giant pumpkin, which featured a square opening for a smaller pumpkin inside. The smaller pumpkin had a smiley face carved into the side, and Jen captioned the image, “When you and your jack-o’-lantern share a vibe.”

However, some fans misinterpreted the photo, and wondered if it could be a pregnancy announcement. Jen made sure to squash that talk, though, as she responded directly to one commenter who pointed out the confusion. “STILL NOT HAVING MORE BABIES,” the actress clapped back. “Good grief, I didn’t even see it, I just saw matching smiles.” 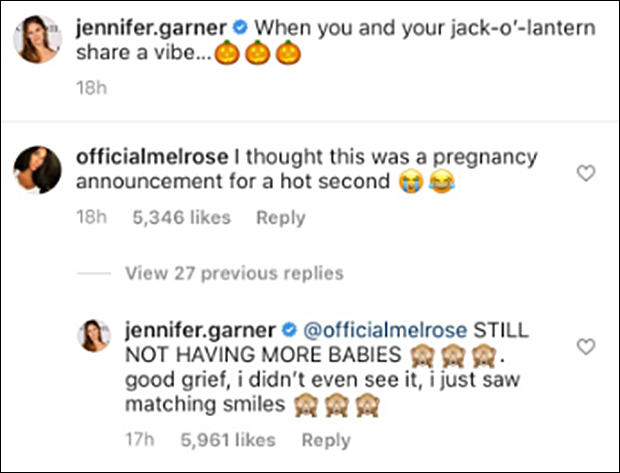 This proclamation comes a month and a half after Jennifer’s last clap back about pregnancy speculation. In a video posted to her Instagram in early September, Jen sported a pair of baggy overalls while on the farm. One fan flat-out asked, “Are you pregnant?”

Jen responded, “I am 48, have three healthy kids, and am not — and never will be — pregnant. We can lay that pupper to rest. Have I gained the COVID-19? Possibly. But that is another story.” She also included several emojis of junk food to reference the second half of her message about the reason behind her potential weight gain.

The 48-year-old is mom to three kids who she shares with her ex-husband, Ben Affleck. Their oldest daughter, Violet, is 14, followed by Seraphina, who is 11, and a son, Samuel, who is 8. After ending her marriage to Ben in 2015, Jen eventually started dating John Miller, but they split earlier this year after two years together.

Ben, meanwhile, has been happily dating his Deep Water co-star, Ana de Armas, throughout 2020. They met on the movie set last fall, and went public with their relationship at the beginning of March. Amidst the coronavirus quarantine this year, the two have practically been inseparable, and she’s even met his kids. However, Ben and Jen also have an extremely amicable relationship and have masted co-parenting together, as well.