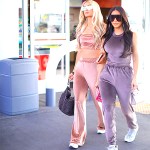 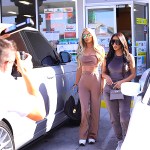 After living in velour track suits during the mid-aughts, Kim Kardashian is determined to bring the look back. She relived her famous 2007 pink tracksuit photo atop a luxury SUV in her new SKIMS outfit.

To celebrate turning 40, Kim Kardashian is bringing back the wardrobe staple of her mid-20’s. Her SKIMS solutionwear brand is going to be dropping a line of velour tracksuits on her Oct. 21 birthday, which the mom of four wore religiously during the mid 2000’s on her way to becoming globally famous. Kim is reminding fans how far she’s come since the days where she did a delightfully cheesy 2007 photo shoot in a pink velour tracksuit atop a Range Rover, by recreating the iconic throwback snapshot.

Major 2000s vibes! We’re bringing back Velour and making it softer and more luxurious than ever before. The new SKIMS Velour collection launching on Wednesday, October 21 at 9AM PT / 12PM ET. Join the waitlist now to receive early access to shop before Velour sells out. pic.twitter.com/68q5rp2BHp

Kim began showing off the first looks from her velour tracksuit collection during an Oct. 15 photo shoot with her BFF from the aughts, Paris Hilton, 39. The next day, one fan then begged her via Twitter to do an updated 2020 version of the photo showing her sprawled out in the pastel pink hoodie top and pocketed sweat pants. Kim must have read the user’s mind, as she reposted the tweet and wrote, “Oh just wait.”

Half an hour later Kim tweeted out a photo of her in a grey velour SKIMS tracksuit, laying across the front of a matching silver Range Rover. She had obviously wanted to recreate the iconic photo, and the fans’ request was the perfect time for her to release it. Kim looked just as amazing if not better than she did in 2007, and was darn proud of it!

Kim announced in her tweet, “Major 2000s vibes! We’re bringing back Velour and making it softer and more luxurious than ever before. The new SKIMS Velour collection launching on Wednesday, October 21 at 9AM PT / 12PM ET. Join the waitlist now to receive early access to shop before Velour sells out.” Oct. 21 just so happens to be Kim’s 40th birthday, so rocking an outfit that she did at age 27 and making it look fresh and new is a great gift to her SKIMS business’ bottom line.

Kim and Paris first showed off the new SKIMS velour line by heading to an actual gas station with a photographer. There the ladies did their paparazzi stroll just like they used to back in the day along Robertson Blvd’s shops, while modeling the updated tracksuits. Kim looked glam in a figure hugging lavender scoop neck sleeveless top and matching pants, while Paris donned a pink velour crop top with wide leg tracksuit pants. All that was missing was the heiress’ beloved chihuahua Tinkerbell, and it would have been a complete double take for the year 2006!