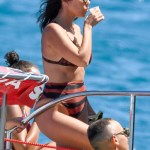 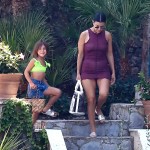 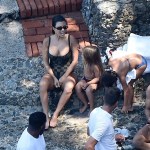 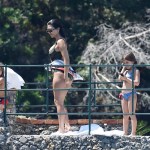 Kourtney Kardashian proved that she was ready to ‘learn new things’ in a thrilling video she posted to Instagram, featuring the mother-of-three wakeboarding like pro! Check out the video from her recent trip with Scott Disick!

Kourtney Kardashian has some major skills! In a new post she shared to Instagram on September 7, Kourtney showed off her incredible wakeboarding talents on the water and looked like she was an absolute professional. In the video, the Poosh founder, 41, was totally suited up for the excursion on the lake, wearing a life vest and swimsuit.

As the camera rolled, Kourt’s friends and family — including ex Scott Disick, 37 — watched on as she kept her balance and smiled brightly while showing off her skills. Friends hooted and hollered, encouraging Kourtney the entire time! “Go Kourtney,” one of her pals said. It was the perfect way to cap off what looked like and incredible getaway for Kourt and her loved ones. “Learn new things,” she captioned the clip.

But Kourtney’s recent excursion also presented more opportunities for longtime fans of the Keeping Up With The Kardashians star to speculate about her relationship status with Scott. The co-parents and former lovers were seen in snapshots soaking up the sun with their kiddos — including five-year-old son Reign who appears in the snap below. The two have been piquing fans’ interests, especially considering the tumultuous summer Scott has had.

The father-of-three shocked fans when he and Sofia Richie, 22, split in May after three years together. While it seemed the two may have rekindled their romance for a few weeks in July, by August the famous pair were done for good. Ever since the dramatic split, fans have wondered if Scott and Kourtney have thought about rekindling their romance. But a source close to the former couple doesn’t really see that type of relationship in their future.

“Kourtney is in a really good place in her life and has no plans to get back into a romantic relationship with Scott. She will always love Scott and co-parent with him for the sake of their children, but she’s fully moved on from him in that way,” a source shared EXCLUSIVELY with HollywoodLife. As for now, the two are completely focused on raising their three youngsters — Reign, Penelope, 8, and Mason, 10. “Kourtney & Scott really are best friends and will always love one another, just not like that. She’ll always want what’s best for him.”