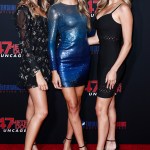 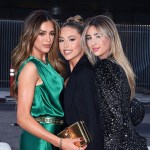 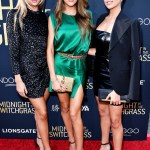 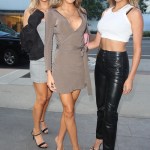 Sistine and Sophia Stallone reveal EXCLUSIVELY to HL the odd workout their father, Sylvester Stallone, tries to get them to do whenever they get in the gym.

“I do about an hour to an hour and a half [in the gym] a day,” says Sistine Stallone, along with sister Sophia Stallone, when speaking EXCLUSIVELY with HollywoodLife. The daughters of Sylvester Stallone and Jennifer Flavin dished on their family’s workout routine following the launch of their new podcast, Unwaxed. It should come as a surprise that Sistine, 22, Sophia, 24, and sister Scarlet Stallone, 18, have followed in their parents’ fitness footsteps. “We are all big workout fanatics,” said Sistine, “so all five of us will be in the gym at 10:30 in the morning. It’s a lot of fun. Most of the time, we’re taking a lot of dance breaks, but it’s really fun.

“I put a lot of emphasis on wellness and fitness,” says Sophia. “We all eat very healthily. We always work out. It’s not because you’re trying to get to look a certain [way], it’s because we just love cooking and we love working out together. We find it very fun, and we feel our best when we do it. Especially now in quarantine, we have the time for it.”

It doesn’t hurt that these girls have a fitness icon as a father. Even at 74-years-old, Sly remains as ripped as ever, and he’s been a huge asset in helping Sophia and Sistine stay in shape. “Definitely,” Sistine tells HollywoodLife. “My dad had us doing deadlifts and throwing shotput at around 10 years old, so it’s definitely something that has been embedded in us.”

Though, sometimes, Sly’s fatherly help doesn’t always land, especially when he tries to recast Rocky with his daughters. “When we’re in the gym, he always tries to get us to throw a punch,” adds Sistine. “It always ruins the flow of my work out. Like, ‘come on, dad. Later, later.’ But another thing now is he’s very into yoga. And he’s always trying to get me to do it with him so he can prove how hard it is and that I can’t keep up with him. I’m like, ‘Okay, Dad. You’re right. You can hold the downward dog pose longer than me.'”

The thought of John Rambo doing a vinyasa sequence might leave some minds blown, but Sophia adds that her dad does have some great pointers when it comes to working out. Actually, his biggest piece of advice right now is to not put so much stress on your body and really relax,” she tells HollywoodLife. “I feel like when you overwork out sometimes, it can really get too hard on your body. So, if you’re working out you want to take time to also go on long walks, to do yoga. It’s important [to relax], and my dad always reminds us to not go too hard 24/7.

To get in shape, it takes more than having Rocky Balboa as your personal trainer. As Sophia said, the Stallones like to eat healthily, and the sisters shared their diet with HollywoodLife. “Normally in the morning, I will have a small snack before I work out,” says Sistine, “and then my little sister [Scarlet] makes the most incredible oatmeal. So, she’ll make us either oatmeal or a protein smoothie. Then, for lunch, I will have a veggie wrap, and we also love to bake but will bake a lot of healthy alternatives.”

“So we’ll eat dessert for lunch except it’s healthy,” said Sophia. “A banana bread-type thing but made extra healthy,” says Sistine, adding, “And for dinner will have protein and vegetables and of course, after dinner, we’ll have to have our ice cream.” “We eat three meals a day, plus dessert,” chimes in Sophia. “That’s partly why we work out so hard — so that we can do that.”

Sophia and Scarlet’s trainer, Kevin Mejia, also shared some of the sisters’ routines with HollywoodLife. They conquer some of the toughest exercises in the gym with ease. We focus sessions on consistent toning and core work. They love the bands, but never shy away from weights,” he told us EXCLUSIVELY. Sly should be proud.

Listen to more of Sophia and Sistine Stallone’s adventures on the new PodcastOne podcast, Unwaxed, available wherever you find on-demand audio.