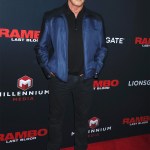 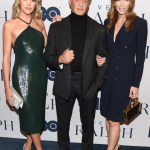 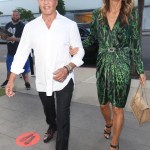 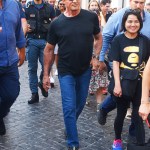 Rocky still has a rock-hard physique – and he’s covered in tattoos! Sylvester Stallone flaunted his buff bod during a shopping trip, while also showing off his impressive ink.

At 73-year-old, Sylvester Stallone is probably in better shape than most men half his age. The Rambo: Last Blood star put his muscles on display during a shopping trip in New York City on Wednesday, Sept. 18. The Hollywood icon was spotted trying on a leather jacket and a selection of shirts, which prompted Sly to get half-naked. After ditching his shirt, the world got an eyeful of his impressive tattoos. He has a massive piece across his back that wraps around to his pecs.

Sly had his shirt on when he and his daughter, Sophia Stallone, 23, palled around on the streets of Rome, Italy, with her mother (and Sly’s third wife) Jennifer Flavin, 51. Though he wasn’t flaunting his fit figure, Sly still turned heads – with just how proud he was of his daughter. Seriously, Sylvester’s smile was a mile-long as he wrapped an arm around his young daughter. He even turned Sophia around to show off the picture of Al Pacino on the back of her coat for all the photogs. Nice.

During this day in Italy, Sylvester covered up his tattoos underneath a black t-shirt. It’s a shame because that piece is excellent – and it holds some major significance to Sylvester. On his right bicep, he has a portrait of his wife, Jennifer Flavin. Sweet! Stallone’s tattoos include an “Italian Stallion,” a raven from the poem by Edgar Allen Poe, the portrait mentioned above of his wife, and tiger eyes from the Rocky III theme song, “Eye of the Tiger.” Celebrity tattoo artist Mario Barth is responsible for some of this impressive work (while artist Jeff Gogue is responsible for the stunning angel on Stallone’s back) and in 2016, Mario revealed that Sly is not just a novice when it comes to ink.

“He has every tattoo magazine since the mid-80s,” said Mario, per The NY Daily News. “He knows everybody in the industry and where they come from. It’s unbelievable. I have not met tattoo historians with the knowledge that he has about the industry.”

Mario also revealed why the then-69-year-old Sylvester waited so long before marking his body. “He wanted to do it at the right time because of his movie career. He had to be careful with what he did to his body. ‘Rocky II’ would have never worked if he was sleeved and had a back panel.”