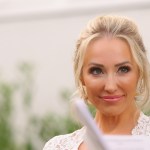 Mary Fitzgerald of ‘Selling Sunset’ shared EXCLUSIVELY with HollywoodLife why Chrissy Teigen’s comments about the reality show made her ‘so sad’ and why the Twitter scuffle is now totally behind her!

Mary Fitzgerald wants fans of the Netflix series Selling Sunset to know that she is “absolutely” a real real estate agent selling luxurious homes. The reality TV show made headlines on August 18 after Chrissy Teigen binged the batch of episodes but noted that she had “never seen any of these people,” questioning the show’s authenticity. “When I first heard that I was like, ‘What? I love her,'” Mary told HollywoodLife EXCLUSIVELY about Chrissy’s comments. “I was so bummed!” The Oppenheim Group associate admitted that while Chrissy’s statements made her feel, at first, “so sad,” she did tell HL that Chrissy “absolutely loves the show and she said nothing but nice stuff after that.”

The misunderstanding originated when Chrissy shared that she had never worked with anyone from the series before, including Jason and Brett Oppenheim, and agents like Chrishell Stause, Heather Rae Young, Davina Potratz, Amanza Smith, Christine Quinn, and more. “I guess her agent said he had never heard of us, but I had never heard of him, either! I’m sure we’ll end up seeing each other or doing a deal together at some point,” Mary continued.

Lol 🤔 I’m in 6 escrows currently and have sold a few dozens of homes in the recent past. I’m sure whoever your agent is, if I haven’t had the pleasure of working with them yet, I will soon. 👌💯

But Mary did share that the Selling Sunset team hasn’t gotten in touch with Chrissy about the Twitter comments. “She’s said stuff on Twitter and stuff but no, we haven’t reached out or anything,” the star continued. However, Mary would love to form a professional bond with Chrissy and even sell her growing family a home fit for husband John Legend, the couple’s youngsters Luna and Miles and their third baby due in the near future. “Absolutely. I think she likes pretty modern. From the look of the two of them I’ve seen of hers, they’re pretty modern,” Mary continued.

While fans anxiously await more episodes and a fourth season of the series, Mary was able to tease a bit of what could happen. “I’m possibly listing a big music person. I can’t say who it is yet, but that might be on the show if we do season four,” she admitted. “We have a couple other people that we’re working with and so it should be really good.”

At the end of the day, though, there is one star that Mary would love to see on the show: “Chrissy Teigen,” she emphatically told HL. Mary was actually one of the cast members to reply to Chrissy’s initial August 18 tweets, telling the Cravings author, “I’m in 6 escrows currently and have sold a few dozens of homes in the recent past. I’m sure whoever your agent is, if I haven’t had the pleasure of working with them yet, I will soon.” Clearly, Mary does have a full plate on her hands! Between a potential new season, selling homes, and more, fans cannot wait to see what the future holds for the reality TV star.