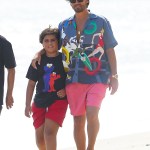 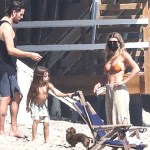 Scott Disick was spotted soaking up the sun in Florida with his son Mason, and Kardashian family friend Jonathan Cheban who was recently robbed at gunpoint.

Scott Disick is enjoying bonding time with his son Mason. The father-of-three stepped out for a beach walk in Malibu with his 10-year-old son on August 18, along with  Kim Kardashian‘s BFF and frequent Keeping Up With The Kardashians personality Jonathan Cheban. Scott, who has been on-again off-again with Sofia Richie for more than two years, donned a blue button down shirt which featured a print of a surfboard and a woman in a red swimsuit. He paired the colorful top with salmon colored board shorts and accessorized with sunglasses and a blinged-out gold watch. His mini-me son also opted for a pop of color as he donned a tee featuring a blue and red print of Elmo from Sesame Street, along with red shorts.

Meanwhile, the “Food God” blogger wore a tee featuring a red and yellow skull along with long black shorts and geometric-shaped sunglasses. The sighting comes less than two weeks after he was the victim of a terrifying robbery. On Aug. 2, Jonathan exited his car around 8:30p.m. in Englewood Cliffs, NJ, when he was approached by two men. One suspect asked Jonathan what the time was before he “brandished a silver-colored semiautomatic handgun and pointed it at the victim and two other witnesses on scene,” per to a statement provided to HollywoodLife by Englewood Cliffs P.D. Jonathan’s mother Galina Cheban was also in the car at the time, and had a gun pointed at her.

A rep for Jonathan released a statement to HollywoodLife, which read, “Thank you everyone for your overwhelming concern for myself and family over the life changing incident on Sunday night. It was a horrific experience, but thankfully we are fine. Lock your doors and watch your back! Keep your family safe!” It seems the Kardashian family friend is now taking time to relax in the sun after the scary experience!