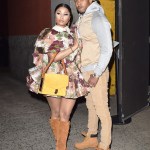 Nicki Minaj and her husband, Kenneth Petty, have been ‘inseparable’ throughout her pregnancy, a source shared EXCLUSIVELY with HL, and now, Nicki couldn’t be more thrilled that her husband can travel with her!

Nicki Minaj, 37, and Kenneth Petty, 42, are basking in pre-baby bliss! Thanks to a judge’s July 31 decision, which stipulated that Kenneth can also travel with Nicki, the two expectant parents can enjoy every step of her pregnancy, wherever they’d like. “Nicki and Kenneth are inseparable so it seems unimaginable that he wouldn’t be by her side throughout her pregnancy,” a source shared EXCLUSIVELY with HollywoodLife. “Nicki’s so grateful he’s able to support her from anywhere,” the source went on. The insider also continued to explain that Kenneth, whom Nicki married in August 2019, has been her “rock throughout this experience,” adding that he will “make an incredible father to their baby.”

As seen in court documents obtained by HollywoodLife, a judge stated that “Mr. Petty shall be subject to ‘location monitoring only – no residential restrictions.'” The latter matter is related to Kenneth’s pretrial restrictions that were set in place after he failed to register as a sex offender when he moved to California with Nicki. Now, Kenneth is able to travel freely with his wife as her manager.

The source shared that Nicki completely understands how “important” it is for Kenneth to be there with her, especially since he has been treating her like a true queen throughout her first pregnancy. “Kenneth has always been super attentive to Nicki, but now that they have a baby on the way it’s next level,” a secondary source revealed to HL. “He’s with her 24/7 and he’s all about making sure she has everything she needs.”

Naturally, none of Kenneth’s gestures and pampering have gone unnoticed by Nicki, who kept her pregnancy under wraps for months. She feels “so lucky to have a partner like him,” the second insider shared, adding that Nicki “feels like she chose the right man to have her child with because he’s 100 percent there for her and the baby already.”

The “Super Bass” rapper set the internet buzzing after she revealed her months-along pregnancy with a number of Instagram photos on July 20. Of course, the rapper is still incredibly hard at work, and Kenneth only wants to be as supportive as possible during the last weeks of Nicki’s pregnancy. Throughout this experience, the private couple’s love has only grown, as has Kenneth’s complete admiration and devotion to his talented, powerful wife. “He makes her feel like the most beautiful woman in the world,” the secondary source revealed, adding “he only has eyes for her.”