Eileen Davidson has yet to make her highly anticipated cameo on Season 10 of The Real Housewives of Beverly Hills, and she’s already spicing things up. The longtime soap actress, 61, got a response out of Denise Richards after recent comments she made in a June 14 interview.

“A few of the Housewives came to my husband’s premiere of his movie Seven Days to Vegas and I kind of had a feeling something was going on. And I was kind of waiting for something to happen,” Eileen began during a recent episode of Bravo’s “Daily Dish” podcast. “But it did feel a little weird, and I asked Denise [Richards], ‘Are you OK?’ because it just felt weird, and she was like, ‘Yeah, I’m fine.’ Something was going on,” she recalled.

Since you publicly spoke about this 😂 @eileen_davidson when you asked me if I was ok at your husband’s premiere I was so nervous knowing I was having surgery in two days. I was so sick & in so much pain but we still wanted to be there.& I hadn’t told any of other women about it

It didn’t take long for Denise to fire back on Twitter about their run-in at the September 2019 movie premiere. She cleared the air about her apparent odd behavior, and revealed that the event was just 48 hours before she was scheduled to undergo hernia surgery. Fans of RHOBH watched part of Denise’s recovery on the show.

“Since you publicly spoke about this @eileen_davidson when you asked me if I was OK at your husband’s premiere I was so nervous knowing I was having surgery in two days,” Denise tweeted on Monday, June 22. “I was so sick & in so much pain but we still wanted to be there.& I hadn’t told any of other women about it.”

I never said she was

Denise hit back at Eileen in one tweet, but followed up after a Twitter user chimed in and suggested that maybe Eileen wasn’t “speaking negatively” about Denise. “I never said she was,” Denise replied. 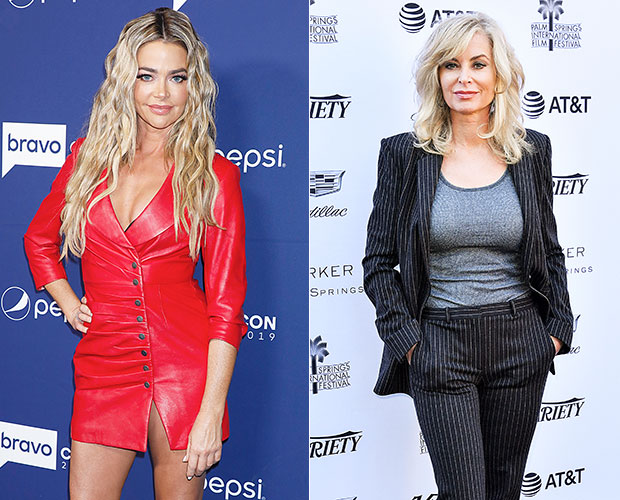 Denise has been a controversial fixture during the 10th and current season of RHOBH. She’s been at odds with her co-stars — Kyle Richards, Lisa Rinna, Erika Jayne and Teddi Mellencamp — since she took issue with them discussing threesomes at a dinner, which took place at her home, in front of her teenage daughters, Sami, 16, and Lola, 14.

Meanwhile, Eileen is set to make a highly anticipated return to RHOBH, around the same time Brandi Glanville‘s alleged affair with Denise will (potentially) be explained. Brandi is set to appear on the show as a guest in the latter half of season 10. Eileen, who was a full-time Beverly Hills housewife, left the show after Season 7.

As for her opinion about Denise and Brandi, Eileen admitted that she (like RHOBH fans) is clueless. “I really don’t know what happened [with Brandi]. I don’t know if it happened,” she said on the “Daily Dish” podcast. Though, Eileen did admit that she sympathizes with Denise.

“I honestly feel for her. Because even though you sign on for this, it’s not easy. And I’m not sure if she was prepared for all of this, you know? I feel for her,” she explained.

Eileen, who filmed scenes for RHOBH at Kyle’s house in November 2019, gushed over reuniting with her former cast-mates. “It was fun to see everybody,” she said. “Kyle’s house is completely beautiful, and it was a great party.”

The Real Housewives of Beverly Hills returns to Bravo from hiatus in July. Be sure to check back at HollywoodLife for weekly recaps!