Chrissy Teigen revealed she got an at-home coronavirus test on May 26 because she was having an upcoming surgery, and naturally, fans were curious about what medical procedure she’d be undergoing. Since Chrissy is never one to hold back on social media, she took to Instagram to share what’s going on. Luckily, everything’s okay with the model’s health — she’s just decided to get her breast implants removed! “A lot of people are understandably curious (and nosey!) so I’ll just say it here,” Chrissy wrote, “I’m getting my boobs out!”

She then went on to explain why she came to this decision in her mid-30s, after having two kids. “They’ve been great to me for many years, but I’m just over it,” Chrissy added. “I’d like to be able to zip a dress in my size, lay on my belly with pure comfort! No biggie! So don’t worry about me! All good. I’ll still have boobs, they’ll just be pure fat. Which is all a t** is in the first place. A dumb, miraculous bag of fat.” Along with the message, she shared a throwback photo of herself proudly showing off her bare chest while splashing around in the ocean, WHICH YOU CAN SEE HERE. 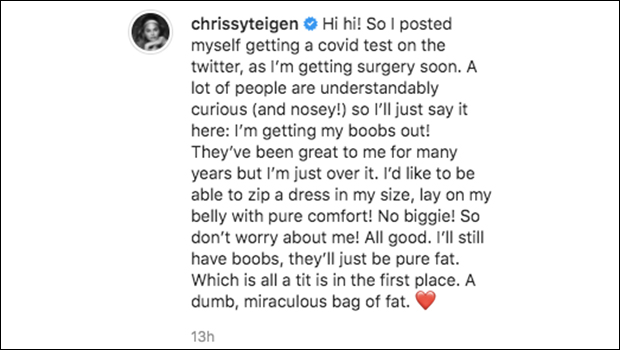 Chrissy actually just opened up about her boob job for the first time during an interview with Glamour UK, which was released earlier this month. She revealed that she got the surgery when she was “about 20 years old” (she’s 34 now). “It was more for a swimsuit thing,” Chrissy told the mag. “I thought, if I’m going to be posing, laid on my back, I want them to be perky. But then you have babies and they fill up with milk and deflate and now I am screwed.” She also explained that she didn’t change her cup size when she got her implants, but rather, she made her chest “rounder” to “fill [it] out.”

Now that Chrissy is a mom of two, though (she has a daughter, Luna, 4, and son, Miles, 2), she’s much less focused on body image. “I don’t take the aesthetics so seriously now,” she revealed. “It’s very fulfilling, not having that pressure of putting on a swimsuit and looking for for a magazine while running around a beach, which I did when I was modeling. I don’t feel like my body is where I’m going to be sh***y to myself, either. I’m already thinking about enough things I’m mad at myself about. I can’t add my body into it.”