Demi Lovato took to Instagram on May 2 to share two stunning new pictures of herself. In the pics, she’s wearing no makeup and a strapless, one-piece swimsuit in the pool. The first shot is a close-up selfie of her glowing face, while the second is a full-body shot of the swimsuit, with Demi striking a sexy pose. In the caption, she revealed she finally “discovered the self timer feature,” and joked that her photographer is “in trouble” now that she can take photos on her own.

The images received a ton of love on social media. Demi’s boyfriend, Max Ehrich, commented with the heart eye emoji, to make sure his girl knows that he totally approves of her sexy pics. Meanwhile, Ashley Graham also loved the raw and real photos. “My girl is straight fire,” she wrote in the comments section. Other celebs who weighed in included JoJo, who wrote, “A beauty,” and Kesha, who gushed, “Ummmm gorg and those freckles!”

Of course, fans were most interested in Max’s comment, since he and Demi haven’t been super public with their romance. Many of Demi’s ‘Lovatics’ responded to Max’s message, warning him to “take care” of the singer and treat her right. Max, who starred on The Young and the Restless from 2012-2015, has been dating Demi since earlier this year. 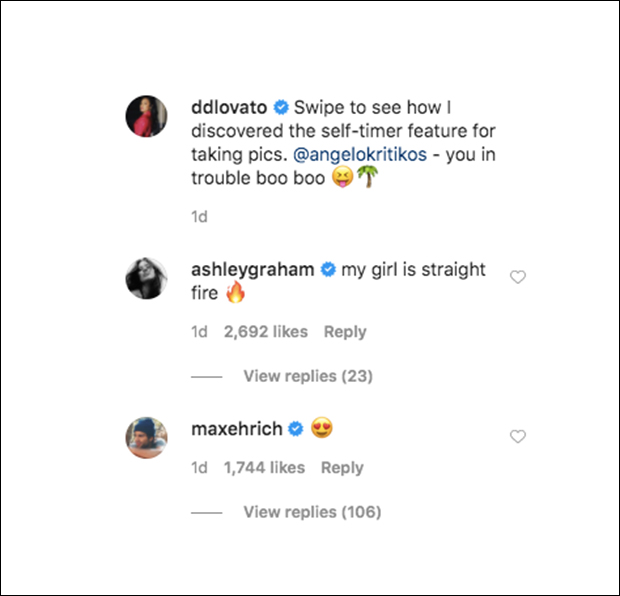 Swipe to see how I discovered the self-timer feature for taking pics. @angelokritikos – you in trouble boo boo 😝🌴

The pair’s relationship went public in March, when photos revealed that they were quarantined together amidst the coronavirus pandemic. Demi has not openly talked about her new man just yet, but things definitely seem to be going well between them!