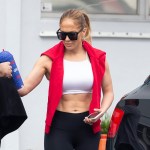 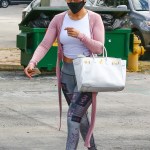 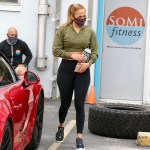 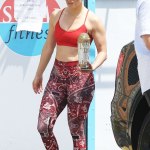 Jennifer Lopez and Alex Rodriguez worked up a sweat in the gym, as the actress and singer lifted weights while her former Yankee player fiancé admired his soon-to-be wife!

Although they are staying safely in Miami, that doesn’t mean that Jennifer Lopez and Alex Rodriguez are shirking their gym commitments! The couple shared videos of their daily workout on the former Yankee’s, 44, Instagram story on April 20, and both appeared to be breaking a sweat. The Hustlers actress, 50, showed off her fierce, fit figure decked out in Niyama Sol workout apparel and lifting heavy weights. J. Lo’s gorgeous, naturally curly hair flowed to her shoulders as she brought the dumbbells to her pecks, curling her toned arms upward. The “On The Floor” singer also captured her fiancé breaking a sweat at Midtown Miami Gym while lifting weights. But it was all in a day’s work for the hot couple!

Even though fitness is a major priority for J. Lo and A-Rod, the couple is also putting their family first during this uncertain time. On April 4, the pair joined their kids, J. Lo’s twins Emme and Maximillian, 12, and A-Rod’s daughters, Natasha, 15, and Ella, 11, for a game, bunting a volleyball around in the lush grass of their Miami home. Family has been a pivotal part of the couple’s high-profile relationship. And although the former baseball player and recording artist became engaged in March 2019, they still aren’t putting pressure on each other to get their wedding plans going.

“Jen and Alex want to make their wedding into something very special and once we are all removed from the fear of what is going on in the world it will be a nice thing for them to plan and think about,” a source shared EXCLUSIVELY with HollywoodLife. “Right now it’s really all up in the air but Jen has been so cool about this whole thing,” a second source disclosed. “She is used to working under pressure and plans changing at the last minute. She isn’t stressing about this at all. She knows things will work out how they’re supposed to and that their wedding day will be perfect no matter what,” they added.

Although it appears that any wedding plans the couple did have are at a standstill, that didn’t stop J. Lo from joking about having a TikTok wedding! “It’s something to think about,” the performer joked to Ellen DeGeneres during her virtual call with the daytime talkshow host. In all seriousness, however, J. Lo assured Ellen that she and her family are “in a holding pattern like the rest of the world. Again, it’s something we’re just going to have to wait and see in a few months how this all pans out.”