Chris Brown seems to be missing Ammika Harris while they’re quarantined separately during the coronavirus outbreak. Ammika took to Instagram on April 12 to post a gorgeous, makeup-free photo, and fans quickly noticed Chris pop up in the comments section. He left two comments: First, a red heart emoji, and second, the word ‘You.’ Fans are still uncertain what the actual status of Chris and Ammika’s relationship is, but regardless of the label, he certainly seems to be crushing on her!

Ammika and Chris were actually first linked back in 2015, and they sparked romance rumors again in 2018. After a few weeks of hot and heavy public outings, things seemed to cool off between the two — until rumors surfaced that Ammika was pregnant in May 2019. The pair never confirmed the pregnancy rumors, until after their son, Aeko Brown, was born in Nov. 2019. They waited for a few weeks after his birth to share the news, and ever since, they’ve both been posting photos and videos of him non-stop.

However, Ammika and Aeko are currently quarantined in Germany, where her family lives, while Chris is back in Los Angeles. As HollywoodLife EXCLUSIVELY reported, Chris is staying in constant contact with Ammika and Aeko via FaceTime calls and through photos and videos, but he’s clearly still missing them both. 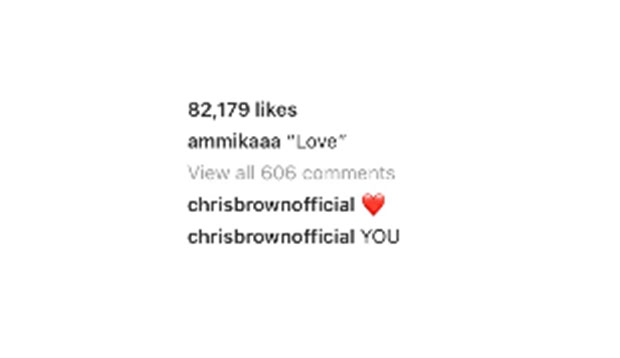 Meanwhile, last week, Chris left another Instagram comment that had fans buzzing. A fan account shared a video that reminisced on Breezy’s relationship with Karrueche Tran, and he commented, ‘Damn,’ on the clip. He eventually deleted the message, but not before the account’s owner had taken a screenshot for the world to see. It looks like this whole quarantine situation really has Chris in his feels!

Jamie Lynn Spears' Daughter, 13, Is Taller Than Her & So Grown Up In Rare Photos