What’s really going on here? Kourtney Kardashian, 40, drove fans crazy after she hinted about her desire to be pregnant again in the comments section of her latest Instagram photo posted on Friday, April 10. The mother-of-three looked absolutely stunning in an orange sheer dress unbuttoned halfway up the front and matching panties that exposed her amazing midsection. Her gorgeous hair cascaded down both sides of her shoulders as she struck one heck of a seductive pose for the camera. One fan hypothesized that she was pregnant after they witnessed the sexy pic to which Kourtney had no issue denying but left quite the hint in her response. “put the blessing out there though,” she wrote next to a praying emoji.

This isn’t the first time this year that Kourtney has discussed something baby-related. She posted an Instagram selfie back in January where the reality television superstar wore an orange long-sleeved bodysuit. A nosy fan asked her if she was pregnant in the comments section even though her stomach looked fairly flat. Instead of being insulted, she responded back with, “No, I wish.”

A HollywoodLife source revealed EXCLUSIVELY days later that Kourtney was “joking” about wanting to be pregnant and that she was just “respond to a commenter’s trolling.” Don’t count her out just yet in the baby making department, however, as the insider said it could happen in the future. “She isn’t trying right now to have another baby, but it has been a conversation she’s had with herself ever since Reign (now 5) has gotten older,” they admitted, noting that Kourtney’s always tussled with the idea of having more kids. 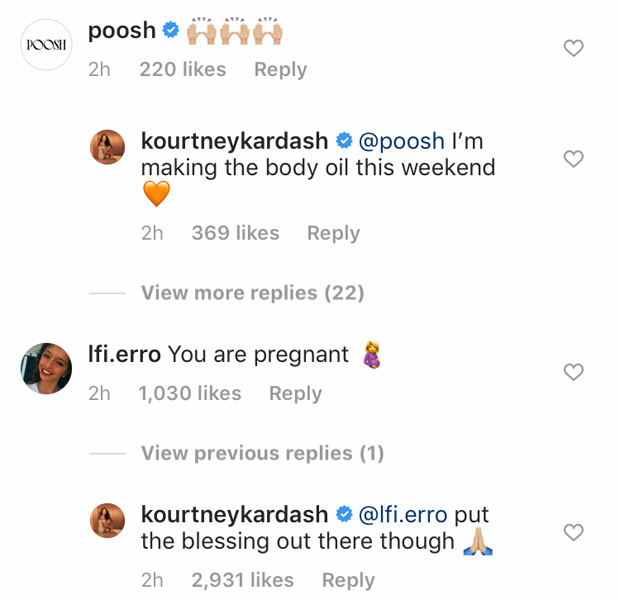 The source continued, “It would be possible if she found the right guy and they had those conversations. She’s in a never say never mood when it comes to all of that.” Kourtney’s mother Kris Jenner, 63, initially said that she would be the next KarJenner girl pregnant during her appearance on The Ellen DeGeneres Show in February. “Or maybe Kylie (Jenner)..what do you think? I think Kourtney,” she then said before adding, “Maybe Kendall (Jenner).”