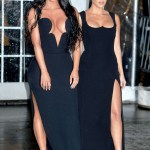 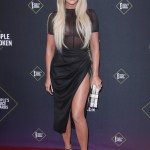 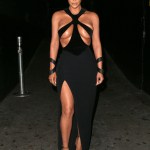 Battle on? Kourtney Kardashian clapped back at Khloe after the Good American founder claimed she ‘ruined’ her big Oscars evening with baby sister Kylie Jenner.

My turn to talk! Kourtney Kardashian, 40, shared a bunch of glamorous Instagram shots on Tuesday, February 11, of her and Khloe, 35, before they headed to Jay-Z and Beyonce‘s star-studded Oscars bash. “Date night, even though she ditched me half way through,” the mother-of-three captioned the sexy snaps. This was more than likely in response to Khloe accusing her of “ruining” her date night with Kylie Jenner, 22, at the A-list event. “Ugh why did @KylieJenner and I allow @kourtneykardash to ruin our night last night? Ugh,” she tweeted on Monday, February 10. The second tweet came minutes later, with Khloe sharing an exacerbated “Oh @kourtneykardash,” followed by a string of exclamation points!

Khloe had some words for Kourtney in her latest post, saying her accusation was “Gluten Fraud” and that she’s “still not” feeling her older sister and, wait for it, that she’s a “scammer”! It all appears to be in good fun though as their interactions back and forth were lighthearted and not meant to be taken too seriously. Meanwhile the sisters could not have looked more glam if they tried that evening which fans definitely took note of outside them playfully shading one another.

The mother-of-one dazzled in a strapless white dress that had a very, VERY high slit going up her right leg. She debuted a short blonde bob to go with the beautiful ensemble while letting the outfit do the talking by wearing no jewelry. Meanwhile Kourtney, who is also known for her eye-catching looks, left little to the imagination in a sparkly see-through dress. Both women were left with endless compliments in the comments section of Kourtney’s post where fans called them “gorgeous,” “beautiful” and “stunning”.

Date night, even though she ditched me half way through .

Kourtney also had a hair makeover of her own recently. She revealed a dramatically different cut in an Instagram post shared on Sunday, February 9, where she appeared to lose several inches off her gorgeous raven hued locks. “Take a seat, I’ve been expecting you,” Kourtney captioned the trio of sultry images taken at her lavish dining table.