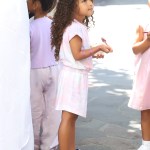 True Thompson and Dream Kardashian are the stars of Khloe Kardashian’s latest Instagram pics. Khloe captured her darling daughter and niece painting at her house, and they’re so talented!

Khloe Kardashian and Rob Kardashian have two little artists on their hands! Khloe shared with fans on Instagram pics she took of her one-year-old daughter, True Thompson, and True’s three-year-old cousin, Dream Kardashian, having a total blast on a recent playdate. True and Dream were busy painting on Khloe’s kitchen floor, hard at work with with brushes in hand as they created their best Jackson Pollock interpretations with watercolors. For someone who’s so concerned with cleanliness that she once crawled around that floor on her hands and knees looking for dust specks, Khloe’s pretty chill about them painting on her white tile!

Dream and True looked adorable for their painting playdate. Rob’s daughter rocked an oversized tie-dye tee, pink sweats, and tiny socks. True wore cute leggings and a long-sleeved tee covered in stars, with a pair of white Crocs. Both girls had their hair in matching space buns. It’s no secret that Khloe loves to document her daughter’s adorable playdates on social media. She’s a first time mom, after all! The Kardashian and Jenner kids are all thick as thieves, just like their parents, and the older kids are happy to spend time with the toddlers.  Just last month, Kourtney Kardashian‘s seven-year-old daughter, Penelope Disick, spent some time with baby True. Khloe’s cute video from her visit showed Penelope attempted to teach cartwheels to Khloe, True and her grandma Kris Jenner, 64.

True hung out with her other cousins, Kylie Jenner‘s daughter Stormi Webster, and Kim Kardashian‘s daughter Chicago West, both 2, at Chicago’s Minnie Mouse-themed birthday party. The girls all had their faces painted and rocked Minnie Mouse ears at the birthday bash.

Dream has lots of fun playdates with Stormi and Chicago, too. Just look at this adorable day they had in the park together!