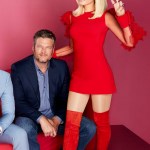 Is there trouble in paradise? No, only good fun, as Gwen Stefani took to Twitter to put her man Blake Shelton on blast for a cheeky video he shared.

Gwen Stefani, 50, is not a woman to be messed with — but she can definitely take a joke. The “Sweet Escape” singer gave her man, Blake Shelton, 43, a piece of her mind when he tweeted a video on Oct. 8 titled Blake’s Life Lessons. “Dating a co-worker? Yep, I know a little something about this,” the country crooner tweeted along with the video. “For me, it’s trying to be good at my job,” he said in a black and white interview segment of the video.

“But at the same time, trying to act like I don’t really care and I’m really rooting for her and ‘oh my god your team is so good.’ Meanwhile, that there’s no chance that she has to win this thing.” Whoa, the truth hurts! And Gwen was not about it. The No Doubt frontwoman retweeted the video, tagging Blake and writing, “How dare u!!” followed by an angry emoji.

Of course, the prank was all in good fun, as Gwen and Blake have never been stronger. Gwen revealed in an Oct. 9 interview with SHAPE that she really counts herself lucky to be with her man. “I feel as if I spent the last four years healing—you know, trying to build my life again. Having a best friend like Blake to help me do that has been one of the greatest gifts,” she shared. And their life away from the cameras is fairly quiet, too. When she’s not traveling the world, Gwen is spending time on Blake’s ranch. “The way we live at the ranch is really simple. There are watermelons that Blake planted and all my wild flowers. It’s a nice contrast to L.A., although I do keep 20 chickens in the backyard here at home too.”

How dare u!! @blakeshelton 😡 Gx https://t.co/NGWaxz5ZxC

The darling duo met in 2015 as coaches on the reality singing competition show The Voice. Both had high-profile relationships prior to taking up together. Gwen and her former husband, Gavin Rossdale, finalized their divorce in 2016 after 13 years of marriage. Blake’s marriage to fellow country singer Miranda Lambert ended in 2015 after four years together. But Gwen and Blake have found a lot of happiness with each other. Their relationship was even front and center during the Oct. 8 episode of The Voice, when Gwen revealed to a contestant, “Almost every song I ever wrote until I met Blake was about heartache and pain!” Who knows if their latest playful Twitter tiff will inspire something in Gwen!