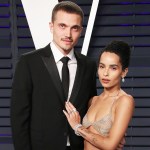 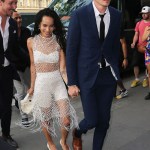 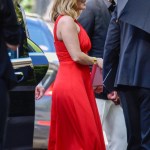 The fun continues for Zoe Kravitz and Karl Glusman after their romantic Parisian wedding! A week later, they were photographed in Italy enjoying a post-wedding vacation with friends.

Married life is treating Zoe Kravitz and Karl Glusman quite well! After tying the knot in Paris on June 29, the lovebirds stayed in Europe to continue celebrating their love, and were photographed out and about in Positano, Italy on July 7. Zoe and Karl appeared to meet up with some friends for dinner during their time in the city, and they definitely still had their newlywed glow. Zoe wore a short black dress for the outing, while Karl was handsome in slacks and a colorful shirt, which was unbuttoned to reveal his chest.

Zoe and Karl were actually first married in a legal wedding ceremony in May 2019, but they held their big celebration until the next month. Zoe’s famous father, Lenny Kravitz, held the reception at his mansion in Paris. Of course, the singer was in attendance, along with Zoe’s mom, Lisa Bonet, and her now-husband, Jason Momoa. Some of Zoe’s co-stars from Big Little Lies, including Nicole Kidman and Reese Witherspoon, also showed up, along with Cara Delevingne and Ashley Benson and a slew of other celebrity guests.

When Zoe got engaged, she shared the news with the world in a super casual way during an interview with Rolling Stone. Karl proposed in Feb. 2018, less than two years after he and Zoe first got together following an introduction by mutual friends.

Zoe and Karl aren’t the only ones who stuck around overseas after the wedding, either! Jason and Lisa spent some time in Italy, as well, and were even photographed attending the Fendi fashion show, while also spending time in Venice, just last week. Why not, right?!