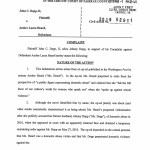 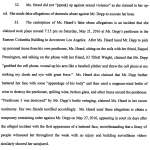 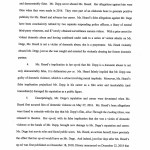 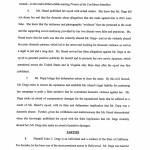 After Amber Heard wrote an article about ‘domestic abuse,’ her ex-husband, Johnny Depp, responded — by suing her for defamation! In the documents he filed with the court, he also claims that it was Amber who abused HIM.

It’s been more than two years since Johnny Depp, 55, and Amber Heard, 32, finalized their divorce, following an acrimonious split in 2016 that saw Amber accuse the Pirates of the Caribbean star of being “verbally and physically abusive” towards her. It appears the drama between them isn’t over, yet. Johnny is suing Amber for defamation, and in his court documents – obtained by HollywoodLife.com – he accused Amber of being the abusive one on the relationship!

“In one particularly gruesome episode that occurred only one month into their marriage,” the documents read, indicating the 2015 incident where Mr. Depp suffered a gruesome injury. “Ms. Heard shattered the bones in the top of Mr. Depp’s right middle finger, almost completely cutting it off. Ms. Heard threw a glass vodka bottle at Mr. Depp – one of many projectiles that she launched at him in this and other instances. The bottle shattered as it came into contact with Mr. Depp’s hand, and the broken glass and impact severed and shattered Mr. Depp’s finger. Mr. Depp’s finger had to be surgically reattached.”

The documents claimed Amber “disseminated false accounts of this incident, casting Mr. Depp as the perpetrator of his own injury.” Johnny, through these documents, also claimed that Amber’s alleged “domestic abuse…continued unabated throughout their 15-month marriage. Ms. Heard threw dangerous objects at Mr. Depp, and also kicked and punched him with regularity.”

Johnny’s documents also claim that Amber “recounted a domestic violence incident that occurred between her and Mr. Depp on April 21, 2016, and reversed the roles, claiming that she was the victim when in truth she was the perpetrator.” Johnny, through the documents, accuses Amber of “falsely [claiming] that Mr. Depp physically attacked her, threw glasses at her, and broke a champagne bottle in their penthouse after her thirtieth birthday celebration on April 21, 2016.” The documents accuse Ms. Heard of punching Johnny “twice in the face as he lay in bed reading,” as she was allegedly “angry with [him] because he was late to her birthday celebration.” The documents say Johnny was forced to “flee their penthouse to avoid further domestic violence at the hands of Ms. Heard.”

This defamation lawsuit stems from a December 2018 op-ed Amber wrote for the Washington Post. In the article, Amber doesn’t name her ex-husband by name, but wrote about how she “had the rare vantage point of seeing, in real time, how institutions protect men accused of abuse… I spoke up against sexual violence — and faced our culture’s wrath. That has to change.” Johnny filed his lawsuit on March 1, and his docs alleged that Amber’s domestic abuse claims were “part of an elaborate hoax to generate positive publicity for Ms. Heard and advance her career.” Johnny is asking for damages in excess of $50,000,000 and Amber, in a statement to Deadline, dismissed the lawsuit as a “frivolous action” aimed at silencing her.