Though Brad Pitt joked that he couldn’t stand next to a woman – even his mother – before “they say I’m dating [her],” there might be someone new in the Once Upon A Time In Hollywood actor’s life. Brad, 56, was reportedly seen kissing model Nicole Poturalski before boarding a private jet from Paris to his chateaux in the south of France, according to OK!. The publication reports that one of its sources says Brad and Nicole were “kissing” and “acting like loved up teenagers.” Brad was reportedly being “super attentive to her,” and despite it being a “semi-public place [he] didn’t seem to mind people seeing him.” When asked for a statement on this report, Brad’s rep told HollywoodLife that they “do not comment on personal relationships.”

It’s been four years since Angelina Jolie, 45, and Brad ended of their two-year marriage (and 12-year relationship), but neither has gone public with a new relationship. Both have been subject to romance rumors, with Brad being linked to women like Neri Oxman, Sienna Miller, Charlize Theron, and Alia Shawkat (who stressed that she and Brad are merely friends.) If there is some fire behind this smoke, here’s what you need to know about his rumored sweetheart.

1. Nicole Poturalski is an international model hailing from German. Listed at 5’10 with light brown hair and blue eyes, Nicole hails from Berlin and is exactly what you would think of when picturing a fashion model. She is managed by the A Management modeling agency, and the pictures on their website reveal her to be a stunning, gorgeous beauty. She knows how to strike a pose, but in a few shots, she shows off a charming, goofy side.

She also is represented by Official Models in New York, and NEXT Models in Los Angeles. She travels around the world for work and shares some of her adventures on her Instagram Story. (Check out her “NYC” highlights to see the time she caught Migos in concert.)

2. She also goes by Nico Mary. Perhaps “Poturalski” is a little too to write out? Or maybe she just prefers a shorter name, but Nicole Poturalski can be found under the name “Nicole Mary” at all her agencies. It doesn’t really matter what she calls herself, right? Like William Shakespeare said, “What’s In a name? That which we call a rose / by any other name would smell as sweet.”

3. Nico is a mom. Nico doesn’t share a lot of her personal life with her 101,000+ Instagram followers. Occasionally, though, she will share a picture of a video of her with a young boy – who happens to be her son! “When you are back together with the love of your life! #nothing #likemomandson #motherson #love #biggestlove #weekends #familyfirst,” she captioned an October 2016 post. Since then, she has shared a few pictures and Instagram Stories of her with her son, including a Feb. 6 video of them dancing along to “Let’s Dance” by David Bowie. “We keep dancing thru life forever happy cause we have each other.” If the use of #babyboy or #likemomandson weren’t giveaways, she confirmed her maternity in another post.

We keep dancing thru life forever happy cause we have each other 06.02. 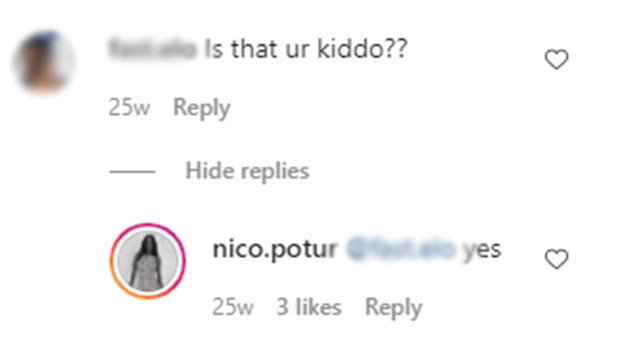 4. She’s appeared in Elle and Harper’s Bazaar. Nico has appeared in numerous print publications, including the German editions of Harper’s Bazaar and Grazia. Perhaps her biggest accomplishment came …just a few weeks ago when she revealed that she would be on the cover of the September 2020 issue of Elle Germany. “Could not be any prouder and more thankful for this amazing opportunity and chance!” Nico posted to Instagram on Aug. 5. “Thank you @ellegermany @andreasortnerstudio @tinkavalerie and all others.”

Can you see i hate driving in the back. More the behind the wheel kind of girl.

5. Nico’s unafraid to get political. Brad Pitt’s dedication to political causes and willingness to speak his mind might be something he and Nico have in common. Though most of the posts on her Instagram are of her posing, lounging, and looking fantastic, Nico has used her IG to take a stand. She posted a black square on June 2, 2020, captioning it, “Black lives matter #blackouttuesday all equal.” In May, she shared a picture of her wearing a long-sleeved shirt that bore the slogan “Protect Kids, Not Guns.”

“I truly believe we need change,” she posted to her Instagram Story around March 2020. “Black Lives Matter. Children’s lives matter…Abused children can’t protest. They can’t connect with others. They can’t raise their voice cause nobody hears them. It’s on US YOUNG PEOPLE. EDUCATE and watch out for your younger fellow humans. Change is needed. Be kind to anyone and your best. I will do the same.”