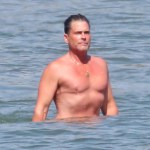 Age is nothing but a number for these hunky stars, who have continued to put their toned bodies on display while shirtless, regardless of age! Check out pics of Pierce Brosnan and more stars soaking up the sun!

Whether it’s good genes or really hard work in the gym, these male celebrities are still sporting perfectly chiseled bodies even after the age of 45. It’s no secret that some celebrities truly seem to not age, and these guys have defied the years with their shirtless pics.

Some of Hollywood’s hottest hunks, including Brad Pitt, 56, Mark Wahlberg, 49, Matt Damon, 49, Will Smith, 51, Justin Theroux, 48, Pierce Brosnan, 67, and more have all been photographed shirtless in their later years, and the pics did not disappoint. The guys look just as good as they did when they were younger!

In 2019, Brad starred in the buzzed-about film Once Upon A Time…In Hollywood. At this point in his life, Brad is much more modest about his body than he was in his younger days. However, for one scene in the film, he stripped out of his shirt and showed off his toned abs for the camera.

He wore nothing but tight jeans and a belt for the scene, and fans couldn’t get over how great his body still looked. Meanwhile, Pierce is in his late 60s, and he still has his James Bond looks! In 2020, he hit the beach in Hawaii while shirtless, and fans were definitely impressed with his silver fox status.

Mark Wahlberg proves age is just a number each and every times he hits the beach, as well. The actor is super into fitness, and still maintains his washboard abs, so he’s a sight to be seen when he decides to catch some rays sans shirt. During a beach trip with his wife, Rhea Durham, in 2019, he rocked printed swim trunks and nothing else, so his abas were hard to ignore!

Even Matt Damon loves to soak up the sun and show off his beach body from time to time. During a trip to Malibu, the Good Will Hunting star showed off his fit physique in black swim trunks and nothing else! His chiseled abs were put on display for everyone to see!

Get to scrolling through the gallery above to see all of the Hollywood hotties who are looking better than ever while shirtless — regardless of their ages. From the beach to movie sets and more, these men just keep on bringing it! Keep up the good work, guys.